I spotted my first wild mushrooms of the season in the first week of June. Although I felt the usual surge of excitement at the onset of the ‘shrooming season, it was tinged with uneasiness at seeing them so early in the year. Like unexpected friends turning up at the door, the pleasure of seeing them was tempered by the question “What’s wrong?”

These were no spring or perrenial fungi such as morels or velvet shank, or even the primordia of chanterelles which often appear early in SW Scotland, but bona fide mid summer to autumn fruiters – blushers and inkcaps. I estimate (i’ve never got round to keeping a wild food diary) that these are about 4 weeks earlier than I have noticed them before.

OK, fungi are notoriously fickle about when and where to grow, and I probably wouldn’t have noticed if they had appeared a couple of weeks early or late. But a month is significant. 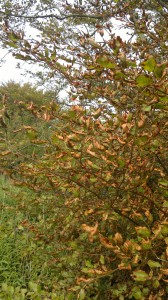 And it isn’t just fungi that are behaving oddly. Check out this picture of a small beech tree that I took on the 7th of June. Normally these leaves would be irredescent green at this time of year. This isn’t just a one-off either. All around the west coast trees are taking on brown and golden hues rather than their usual verdant summer finery. Even tough sitka spruce are looking faded and scorched.

I was due to do some TV filming at the start of June, showing a pair of celebrity chefs wild foods on cliff tops near Portpatrick. Keen to get the very best out of our limited time, I had studiously recce’d the site the week before and worked out what interesting things we could film. On the day of the shoot I turned up to find all but the very hardiest plants (most are pretty sturdy on a spot like that) looking like they had slipped through a time rift and come out the back end of October. Everything but the thrift, silverweed and thyme looked like they had been hit by flame throwers! Check out this picture of hemlock water-dropwort taken on the 3rd of June. 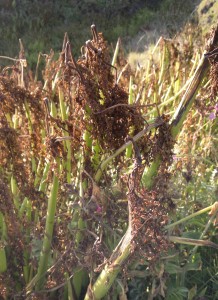 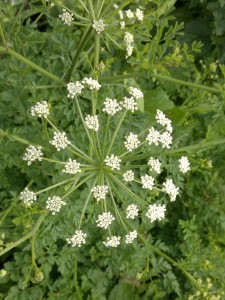 HWD as it should look in June

These odd occurrences are clearly weather-related. But what’s going on?

There is a standing joke in Scotland, whereby during May, any period of sun and clear skies longer than about 6 hours followed by rain, illicits cries of “Well thats summer over”.  Could it be that we really have jumped straight from spring to autumn, not passing ‘GO’ and not collecting any skin colour, picnics or midge bites?

I think we have to be careful not to fall into the common blunder of mistaking weather for climate. I had to laugh when somebody remarked “What’s happened to your global warming now then?”, during January’s cold snap. Its clear to anyone but the most ‘head-in-the-sand’ climate change deniers that global weather patterns are changing. But it is a mistake to assume that every freak bit of weather is directly symptomatic of this.

I think the cause of these odd occurrences on this occasion was 3 days of very strong gales in the middle of May. Such sustained strong winds are unusual at that time of year and they hit the fresh, tender new growth hard, scorching it with its perishing salty blast. As a result, springs new growth looks old and tired already and trees, especially in exposed coastal areas are struggling. I’m no botanist, but I don’t think this will be fatal to any but the weakest trees and will probably just show up as a narrow growth ring when somebody fells a tree in 50 years time. If we start regularly getting sustained blasts at that crucial time in natures growth cycle however, it could lead to a major change in our flora.

The early fungi could be part of the same phenomena. Mycorrizal fungi (which constitute a large proportion of good edible species) form complex symbiotic relationships with plants and trees. Any stress upon these will certainly be sensed by the fungi and result in changed behaviour. It may be the case that fungi can help to support their struggling partners by helping to increase their uptake of nourishment from the soil. It is a complex subject that I am only just beginning to explore. I highly recommend “Mycellium Running” by Paul Stamets for anyone who is interested in the subject of how fungi work with plants and throughout ecosystems to build soils and support plant growth.

In the mean time it is going to be interesting to see what sort of a mushroom season develops…i’ll keep you posted and sign off with this picture of perfectly normal June chanterelle growth that I took last week. Hooray!