“If all wild plants and fungi were edible, we wouldn’t be foraging – we’d be grazing.

And the world would be a very different place…”

I said this on my guided walk this weekend, shortly before nibbling some very poisonous yew needles. 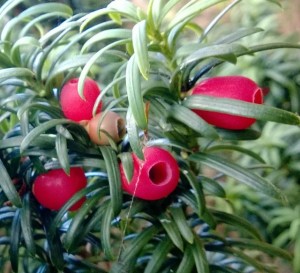 Yew – highly toxic, except for the berry flesh

Perhaps I should explain…

I had yew in one hand, spruce in the other, and 15 very excited chinese ladies chattering 10 to the dozen. As I finished our discussion about the uses (and dangers) of conifers, I strode onwards and took a refreshing, lemony nibble of the tender needles in my right hand. The spruce tasted rather more bitter than usual. Oops. That would be the yew then.

In 25 years of foraging, this was the first time I have ever eaten something seriously poisonous. I decided not to mention it to my group of novice foragers. They were excited enough. 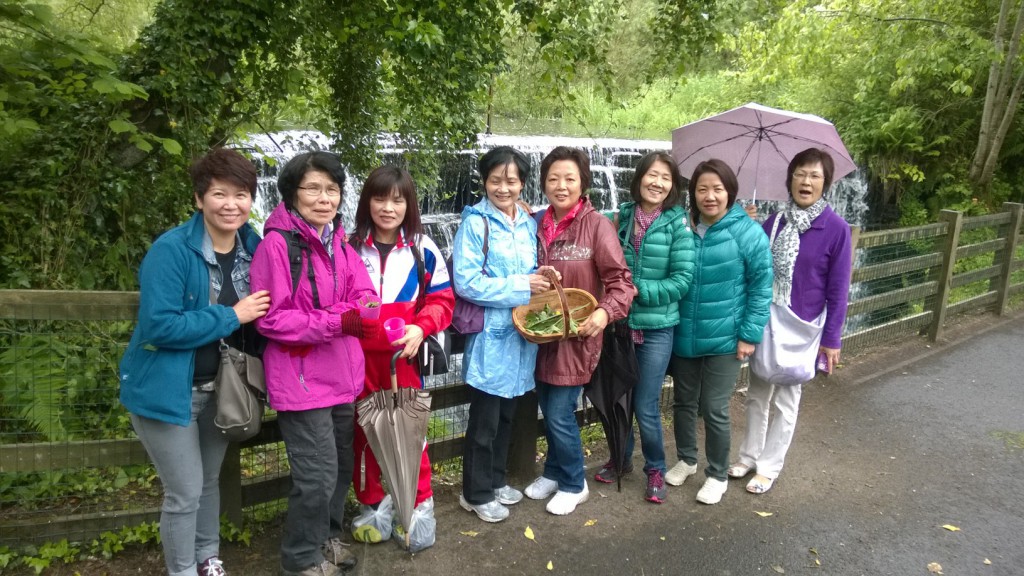 I wasn’t particularly worried…contrary to common belief, there aren’t that many things out there that will kill you from just a nibble. But I did feel a frisson of danger, a heightened alertness to my physiology. A gentle nag of paranoia. And some excitement at being able to record the effects of eating one of the UK’s truly poisonous plants.

I enjoyed a large meal in a nice restaurant with several glasses of wine and whisky afterwards without thinking about it once. But on the drive home, I thought it only reasonable to explain to my wife that should I lapse into a coma during the night, probably best to notify the hospital that I had ingested taxine, a few grams of which can kill a horse.

I’m delighted to say that i’m not writing this from the grave. But I’m perversely disappointed that I can’t report any ill effects at all from my wee lapse of concentration. I may never get the chance for this sort of research again.

But it did get me to thinking about about the whole notion of toxicity and poisoning. 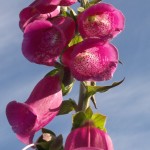 The main reason people come on my guided forays is because they want to enjoy the wonderful flavours and connection with nature that foraging brings, but are scared of poisoning themselves. I feel something is missing from a walk if we don’t encounter something deadly, and often route a walk to maximise meetings with poisonous species. Cynically, I could say poisonous plants and fungi keep me in business. But truthfully, I love these potential killers at least as much as their edible neighbours. I hear people describe them as “evil”, but personally I have nothing but respect and admiration for them, having cleverly – or by a chance of genetics – evolved themselves off the menu. This sometimes backfires when people feel the need to exterminate them, just in case they should rise up and throw themselves down their throats. Many are exceptionally beautiful – wolfsbane, destroying angel and foxglove spring to mind – and all have an important role to play in the ecosystem. To define a plant or mushroom as good or evil according to its usefulness to man is surely the ultimate in human arrogance? 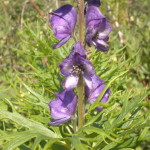 But what is poison? When does something cease to be edible and become poisonous. Can we measure that point? And if we can, do we actually stop consuming things at that point?

Take a look at this layout board from one of my fungi foraging days last year: 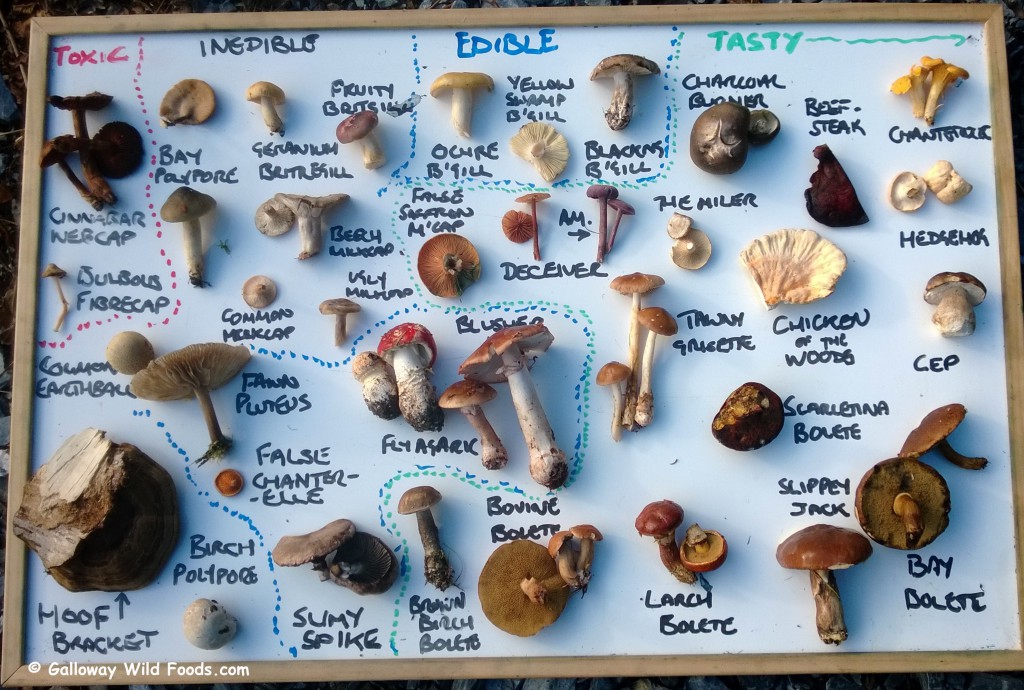 Note the labels across the top from “Toxic” on the left, through “Inedible”, “Edible” and “Tasty”, and that I have vaguely arranged our finds into those categories. Also, please be aware that this board could just as easily have been populated by plants. Its a common misconception that there are more deadly mushrooms than plants. Mushrooms are generally just harder for the untrained eye to tell apart – the fine distinctions between “delicious” and “deadly” make people paranoid. 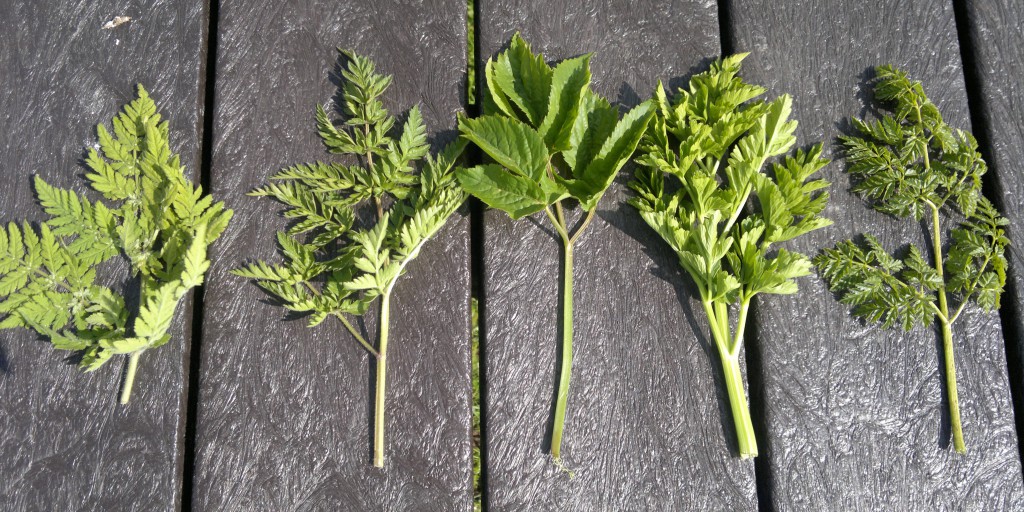 That the “Tasty” and “Edible” sections occupy two thirds of the fungi layout board is somewhat deceptive as we were mostly focussing on edible and poisonous species and didn’t pick a lot of species we identified (or failed to identify) that would have fallen into “Inedible” – if we had, “Inedible” alone would have taken up at least three quarters of the board.

If i’d had space, I would have added more headings – for example:

…I could go on. But I hope you see just how complex the world of “Edibility” is – a million miles from the black and white  “Deadly/Edible” notion of wild fungi that many people carry in their heads.

Here are some more stats and insights around poisonous mushrooms that I shared on my social media:

Putting truly poisonous mushrooms aside for a moment, what I find particularly interesting, is that people seem to measure wild food by different standards than they measure shop-bought food.

As a wee exercise, here is a list of other potential foodstuffs. Have a look at the picture and think where you would lay these on the spectrum of edibility:

Presumably most of these would fall into at least the “edible” and hopefully the “tasty” section. Yet the alcohol in vodka, in sufficient dosage, can be poisonous (a hangover is nothing but “alcohol poisoning”) – and alcohol certainly kills more people than any other foodstuff.

Potatoes are part of the Solinacea family – which includes deadly nightshade. Raw potatoes certainly aren’t good for us and when they turn green they are actively toxic.

Peanuts are widely eaten, but a small proportion of people suffer a life-threatening adverse reaction to them.

Cashew nuts are edible when shelled and thoroughly cooked, but contain high levels of urushiol raw – a virulent toxin.

Butter. Mmmmmm. Butter. Delicious, but not good for our long-term health in large quantities. Who wants to live forever..?

As for stupor-market ready meals…well, for a start, does anyone really know what goes into them? Those that eat them place their trust in faceless producers, brands designed not by nutritionists, but by profit-hungry corporations at the end of a very long supply chain. Yes, there are public health officials, supposedly checking all this for us, but they can’t tell horse meat from beef.

Imagine if you could magically transform the exact constituent of a ready meal (or anything else on the list), into the form of a wild mushroom. I’m going to bet that most things on this list would be classed as at least inedible, possibly toxic.

I’m not saying we shouldn’t eat them (well, except stupormarket ready meals, that’s just insane), only that we judge wild foods by different standards to those that are grown, processed, packaged and marketed for us. I’m saying that we’ve been conditioned to trust a faceless corporation more than our own senses.

Foraging is hugely empowering and rewarding. Making close decisions about what you harvest, when and from where, based upon your own learning and observations, makes for an intimacy with your food that simply isn’t possible with anything bought from a shop. The journey towards becoming a fully rounded forager is about learning not just about our quarry, but about ourselves – our personal preferences, tolerances, and what makes us shine.

This journey is entirely safe – way safer than placing our trust in those that seek only to profit from us – provided we stick to the one cardinal rule:

“Never eat anything unless you are 100% certain you have correctly identified it, and you know that it is safe to eat – for you”

Would that people applied the same rule to what they buy. 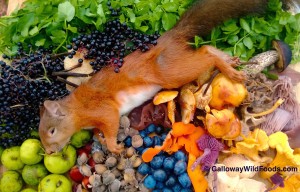 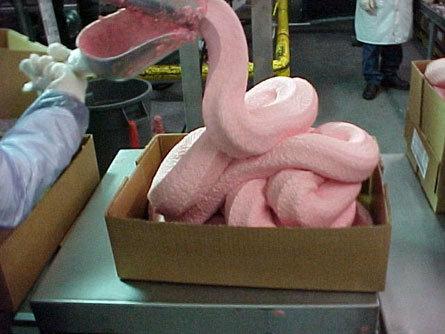 If you’d like to learn more about how to safely, mindfully forage, why not check out my Wild Food Guide, book on one of my foraging walks or book some private tuition.