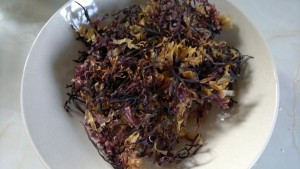 Habitat: Common around the UK, on rocks and in rockpools on mid and lower rocky shores, often hidden beneath larger seaweeds.

Identification: Small, bushy, fan-shaped seaweed with flat fronds of 7 – 15cm with square(ish) tips. Feels tough to the touch. Tastes of very little. While carrageen is scientifically a red seaweed, colour can vary to the naked eye from cream through pink and dark purple to chocolaty brown – which is how it normally looks when I pick it.

Similar Species: Grape pip weed, sometimes known as false carragheen, (Mastocarpus stellatus) is similar to carragheen and often found growing alongside it. It is distinguished by the pointed ends to its fronds  and warty texture as it matures. It can be used in all the same ways as carragheen, so it isn’t necessary to distinguish it for food purposes. 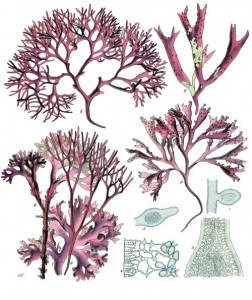 Edible Uses: Carragheen (and false carragheen) is not a seaweed to eat in the conventional sense – its far too tough, even when cooked. But once heated in water it exudes a gelatinous flavourless substance that can be used to thicken soups and stews, or in higher concentrations, set jellies or panna cottas. It also can be boiled with other flavourings to make a rich, nourishing tea. Doing this with, say spruce tips, chaga or elderberries, makes for a very healthy, restorative cuppa that will help keep colds at bay. Add to soups and broths to thicken then remove before eating.

Later in its season, and especially in more sheltered locations, both carragheen and false carragheen can become home to sea mat (Membrainpora membranacea) which appears as pale crusts on the blades. Close inspection (through a hand lens) will show these to be made up of hundreds of tiny craters which are home to minute tentacled filter feeders. These are harmless, but crunchy and not pleasant to eat. They can be scraped off with the back of your nail, but this very fiddly to do with such small seaweeds, so its best to avoid settled specimens if possible. 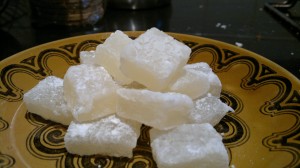 For in-depth films on sugar kelp, and lots, lots more, check out my Seaweed Webinar.