Its no secret that Galloway’s largest loch, Loch Ken, is overrun with the much despised American signal crayfish (Pacifastacus leniusculus). These transatlantic invaders were (mostly) accidentally introduced into British waterways by fish farming entrepreneurs in the 70’s and now rank alongside Grey Squirrels and Japanese Knotweed as the most reviled of non-native species – higher if you are a fisherman. They have also been recorded in a tributary of the Skyreburn since around 1990. It is unlikely to be coincidence that there has been aquaculture near the loci of both outbreaks. 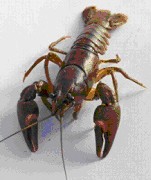 There are four reasons why American signal crayfish are considered a problem:

For these reasons, there are serious restrictions on catching them. Firstly, you need a permit from the Environment Agency (and written permission from the landowner). Unless you have serious research purposes (preferably aimed at exterminating them), this is highly unlikely to be granted. The banks of Loch Ken are littered with ugly signs threatening all manner of punishment to anyone caught trapping them deliberately. Should you inadvertently pull any up on a fishing line, you are obliged to kill them on the spot and dispose of them responsibly (remembering that dead females may still be carrying eggs). I would suggest doing this on a barbecue as they are delicious.

Which brings me to my gripe…could you feel it coming? I understand that a lot of people (including me) enjoy their fishing, and that this can have benefits for the local economy. I also understand that the fishing lobby is powerful round these parts and I will probably be vilified for dissenting from their zero-tolerance line, but does this really mean that we all need to be treated as idiots who can’t act responsibly? Surely if there are too many crayfish in the Ken (and moving into the Dee), people should be encouraged to reduce their population by responsibly catching and eating them?

A major creel trapping (counting and killing) project operated by Dee Fish in 2010 (under contract to researchers trying to get a handle on the scale of the problem) is the only recent impediment to their spiralling population. 700 000 or so were reported to have been killed, which seems to have barely dented the problem and there is an argument that it  may make things worse in the long run. Perhaps a more enlightened approach to managing the harvesting of the crayfish would be more helpful. If properly overseen, this could be at least a partial check on the population and allow for ongoing monitoring and a better understanding of the problem. And we might get some delicious free food out of it too…

In the mean time, as I understand it, legally there is nothing to stop you fishing them out by hand (or even with a shrimp net) and having a nice barbecue by the loch side. Just be sure not to spread them to new waterways….