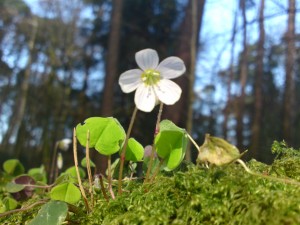 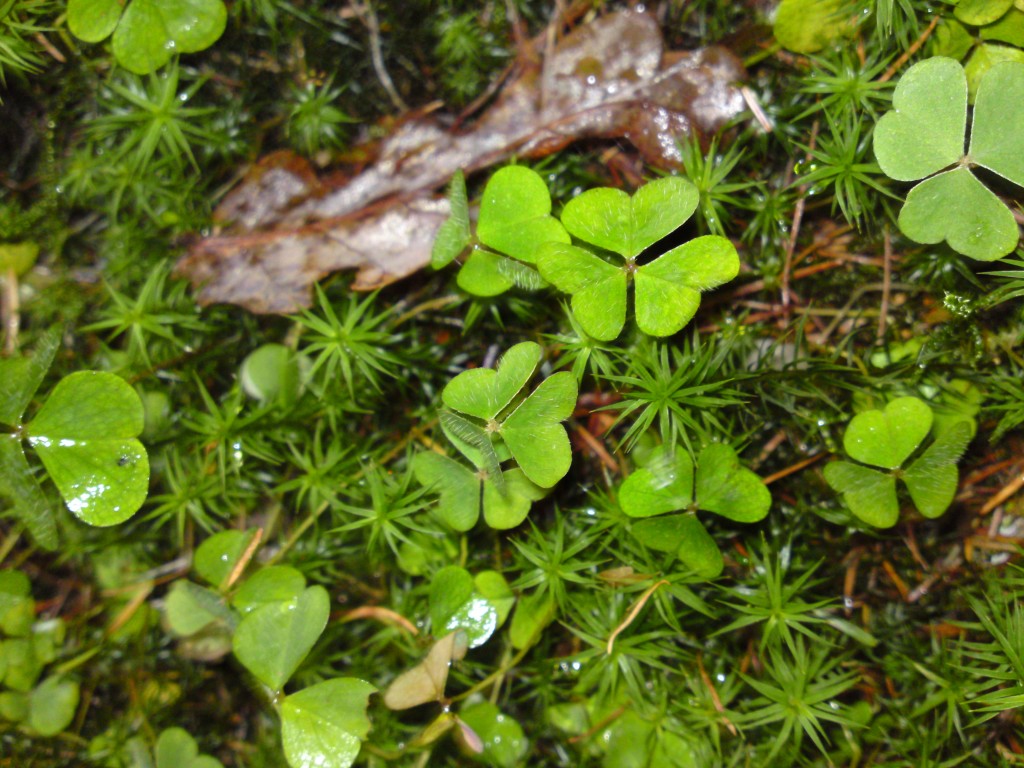 I am very fond of wood sorrel for several reasons.

Not least of these is that it earned me £20 per week for a summer when that seemed like a lot of money (i’m getting on a bit). I would spend an hour or two harvesting it then sell it to a posh country house hotel hidden in a forest somewhere in the dark recesses of Argyll. I still remember my last delivery when I was met by an irate chef who had popped for a ‘herbal cigarette’ in the hotel gardens, dropped his lighter and discovered a thick carpet of wood sorrel within 20 metres of his kitchen. Ah well… Some things are just too good to last. I suppose I should be grateful that he never noticed the ceps growing along the driveway.

Another part of the appeal is the very reason I got rumbled – it is very common indeed in the damp woods of western Scotland. If you can find no other wild food in Galloway, you will find wood sorrel. It looks quite like clover with its 3 small (trefoil) leaves growing from a single thin stem, but while clover’s leaves are oval, wood sorrel’s are  heart shaped (cordate) with tiny hairs (magnify the picture to see them). In the spring it produces pretty wee white/pale pink five petalled flowers that are infertile – minute, self-fertilising flowers near the roots are responsible for reproduction. 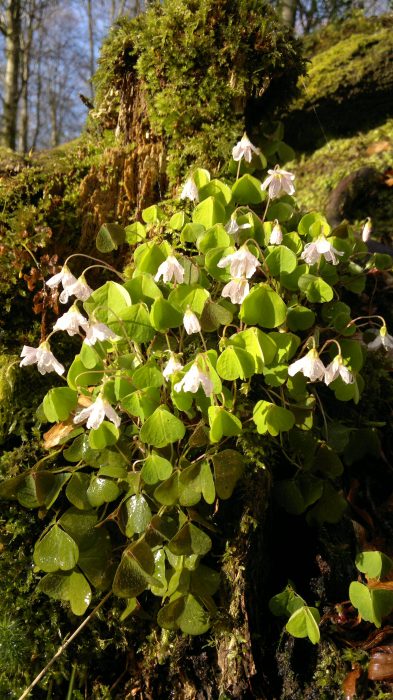 Wood sorrel leaves often fold themselves up in strong sunlight, heavy rain, and at night

In areas where wood sorrel isn’t so prolific, search in thick woodland (coniferous or deciduous) where the ground cover is predominantly moss. I find it all year round in Galloway, though it can get quite sparse in a long winter.

Where established, it can carpet large areas of forest floor for much of the year – another part of its appeal. Provided you aren’t in the frozen north, even in the dead of winter you can usually find some wood sorrel to gain some vitamin C, brighten up a winter salad or add a citrus zing to a dish without resorting to far-travelled foreign lemons. Its taste, which is at its best in spring, is sharp yet delicate – somewhere between grape skins and oranges and more refined than common sorrel.

Like its coarser grassland cousin, wood sorrel works well with fish or can be used as a sharp garnish to cut across richer flavours. I love finding complementary ingredients growing together, and its not unusual to find fungi reclining in its soft green bed.  I like it best straight from the ground as a refreshing wayside snack during warm autumn forays. Its flavour comes from oxalic acid which also makes your mouth water – both chemically and metaphorically. In large quantities, oxalic acid can remove enough calcium from your blood stream to make you ill, though you would have to physically graze it for a few hours to feel any effect so don’t let that put you off.

Wood sorrel makes a nice edible garnish for a gin and tonic, and can be muddled with other herbs to lend its sourness to mojitos and other cocktails. My wife grows a lovely ornamental oxalis called purple shamrock (Oxalis triangularis), which makes a very pretty and tasty garnish. 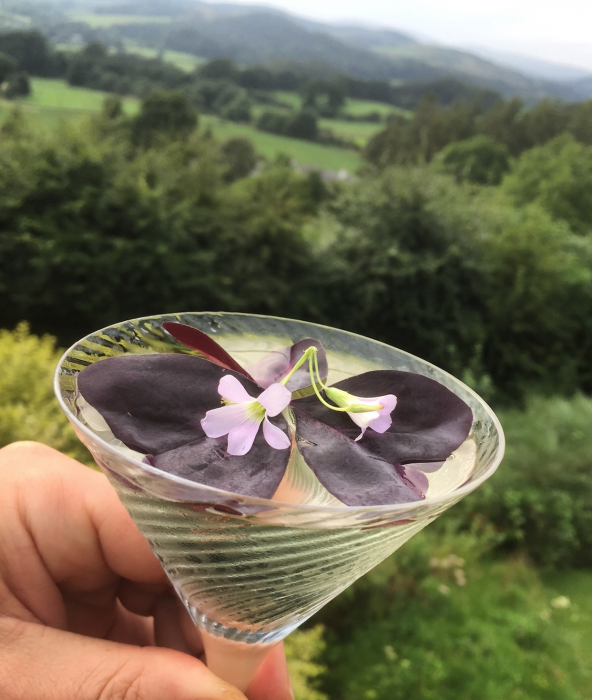