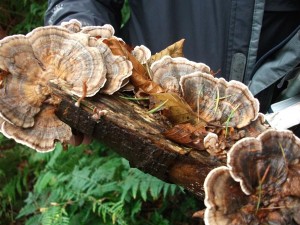 Finding wild food can be a tricky business. It doesn’t matter how experienced you are, how adept your identification skills are or how in touch you are with your ‘inner forager’: if you get too confident or take them for granted, they will scorn you. I ‘relearned’ this valuable lesson for about the 1000th time a few weekends ago when I took out a family of keen beginners to hone and broaden their foraging skills. In my defence, their request for tuition was at quite short notice, which didn’t allow me an opporchancity to do my usual recce of a suitable venue. Nevertheless, I was as confident as I could be that a gorgeous wee wooded glen in the West of Galloway would be thick with both edible and interesting fungi (always the high point of any foray…or so I thought) as well as a great array of mostly out-of-season-but-still-of-interest edible plants. 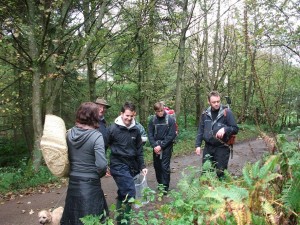 Cara and I had walked through the glen in late spring and the mixture of beech, birch, conifers, mossy banks and overgrown nooks had my fungi senses tingling with anticipation. “If this doesn’t yield swarms of mushrooms come autumn’, I thought, ‘i’ll eat my basket…’ Well it didn’t, and I have to report that willow is tough and hard to digest.

Things started well enough, the weather being damp, grey, gloomy and by far the nicest i’ve started any forage in recently. The family I was taking out (clan Lorimer of Kirkmichael in Ayrshire) were a great bunch – chatty, inquisitive, layed back, comfy in the wilds and with just enough sibling rivalry to maintain the tempo of the hunt. I should have known the foraging gods weren’t smiling on us when we were immediatly repelled from my planned route by a range rover full of tweedy and be-barboured ladies. In clipped but polite tones they asked us not to use the marked footpath and I thought it pertinent to oblige – they looked like they were heading for a shoot and probably had a boot full of small arms. Its a tricky judgement to know when to fight for your ‘right to roam’. I seldom do – Galloway invariably has plenty of alternative venues to offer, and foragers tend to be pragmatic by nature. We were also sporting some pretty hefty basketry, and nothing gets people’s backs up more than thinking you might be about to benefit from something that they are ignorant of.

So we lopped off the start of the route and it soon seemed like a blessing as we stumbled on so much of interest in our revised car park it took us half an hour to cover the first 50 metres. We found greater and ribwort plantain (barely edible), winter cress (delicious and mustardy), mares tail (makes a tasty and health-giving tea in the spring), the ubiquitous bramble and various out of season umbelifers including some sweet ciceley which was enjoying a late resurgence. 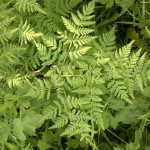 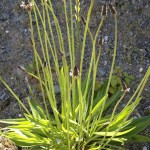 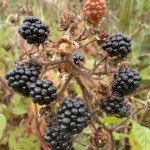 But it was fungi that we were really after and I was so confident that I even curtailed our exploration of an area of mixed woods that had a fair amount of interesting but inedible fungi and a small patch of puffballs which we picked. I was eager to press on to the mossy, south-facing beech, birch and pine woods further on… 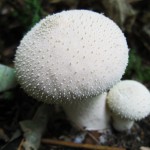 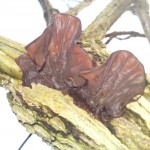 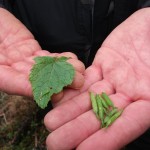 Well those 10 or so wee puffballs were the last fungi, edible or otherwise, we saw all day. I tell a lie – one minute lobe of jelly ear turned up to mock our ever more desperate hunting. It felt like the tree was sticking its tongue out at us. Fortunately clan Lorimer are a hardy, philosophical bunch and their steady banter reminded me that I was taking this fungi-famine a lot worse than they were. They absorbed with good spirit the most testing principle of foraging: treat failure as a lesson and success as the hard earned wages of failure. And never mind…I had packed a 2 litre tub with cauliflower fungus, meadow wax caps, hedgehog mushrooms and orange birch boletes the night before and we could sautee them on my stove for a hearty lunch in the pretty wee cove where the glen meets the sea. All would be well… 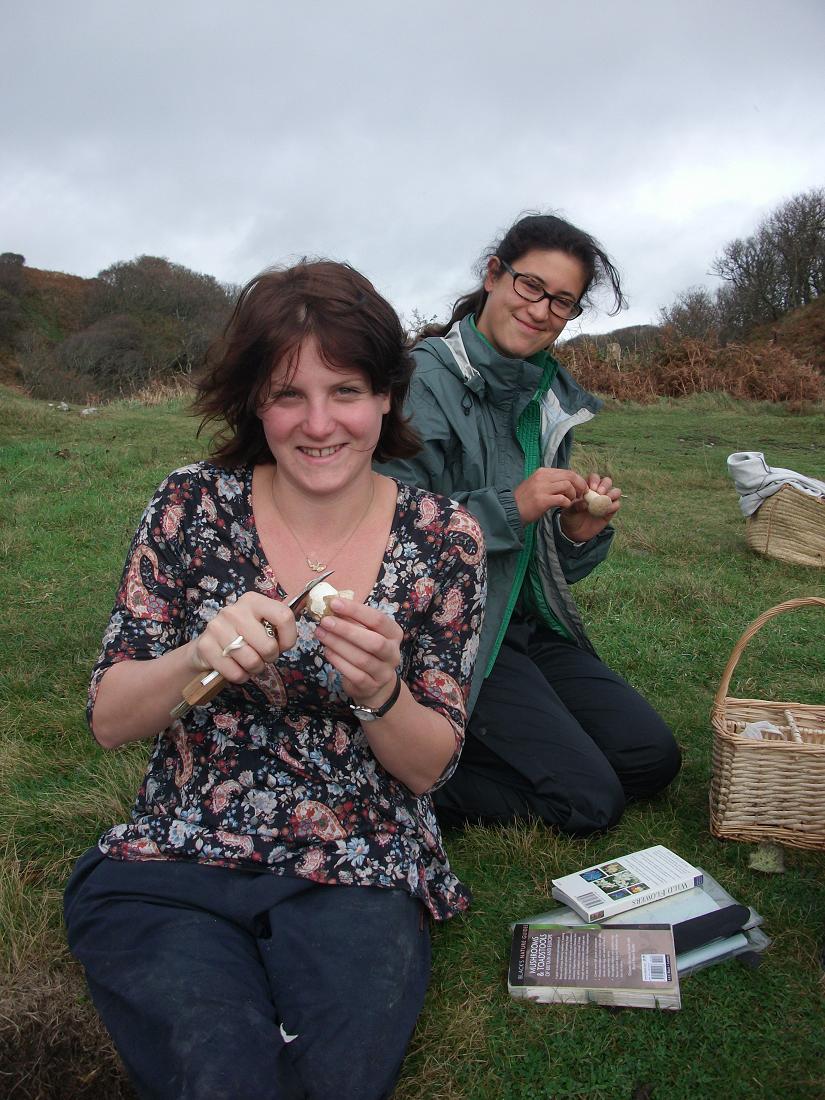 Except, having got up at the crack of dawn to watch Scotland get painfully squeezed out of the rugby world cup (perhaps another omen), I had been too bleary-eyed and distraught to remember to put the mushrooms in my ruksack. Just as I was about to run and hide in the darkest corner of a nearby cave to cry, the sky brightened and reality kicked in. Forager’s must use what is in season and locally abundant, not pine for the unreachable. Clan Lorimer grasped this intuitivly (perhaps being hungrier and less shocked by the paucity of fungi than me) and soon started rounding up winkles and prising limpets from rocks. We whetted our appetites with the wasabi hit of a few sea radish siliques and set to work. 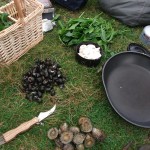 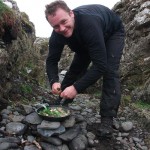 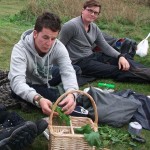 20 minutes later we were tucking into a delicious surf n turf lunch that would have wowed guests in an upmarket brasserie: limpets (less chewy than you might think) and smoked Galloway bacon (the one ingredient I had remembered), sauted with sea kale, sweet ciceley and puffballs garnished with wood sorrel and sea lettuce. It was a really memorable lunch in good company and a beautiful location. Blue sky even prinked the main. Chocolate and jelly babies rounded things off nicely and we might have lounged for hours sipping yarrow tea had the rain not come on. 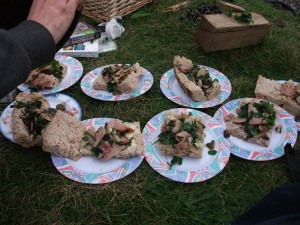 A wet but spectacular walk along the coast back to the pub yielded wild carrot, sloes, ivy leaved toadflax and some beautiful, pallatte-zapping sea buckthorn among other things. Who needs fungi!? 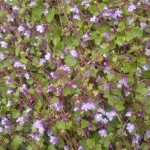 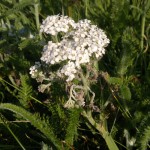 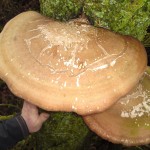 Later, as we relaxed over a few pints and reflected on a grand day out, Will divulged that he had impaled his hand on some wire earlier in the day. It was painful and swollen so we improvised a dressing from a carrier bag and a slice of birch polypore, which has powerful antiseptic properties – though i’m not sure that the doctors in the party were fully convinced!

The whole day for me was a thoroughly enjoyable journey during which I learned lots about myself, the true skill of foraging and the fickleness of fungi. And I will be taking a trip up to Ayrshire in the not too distant future to do some serious fungi foraging with the Lorimers… 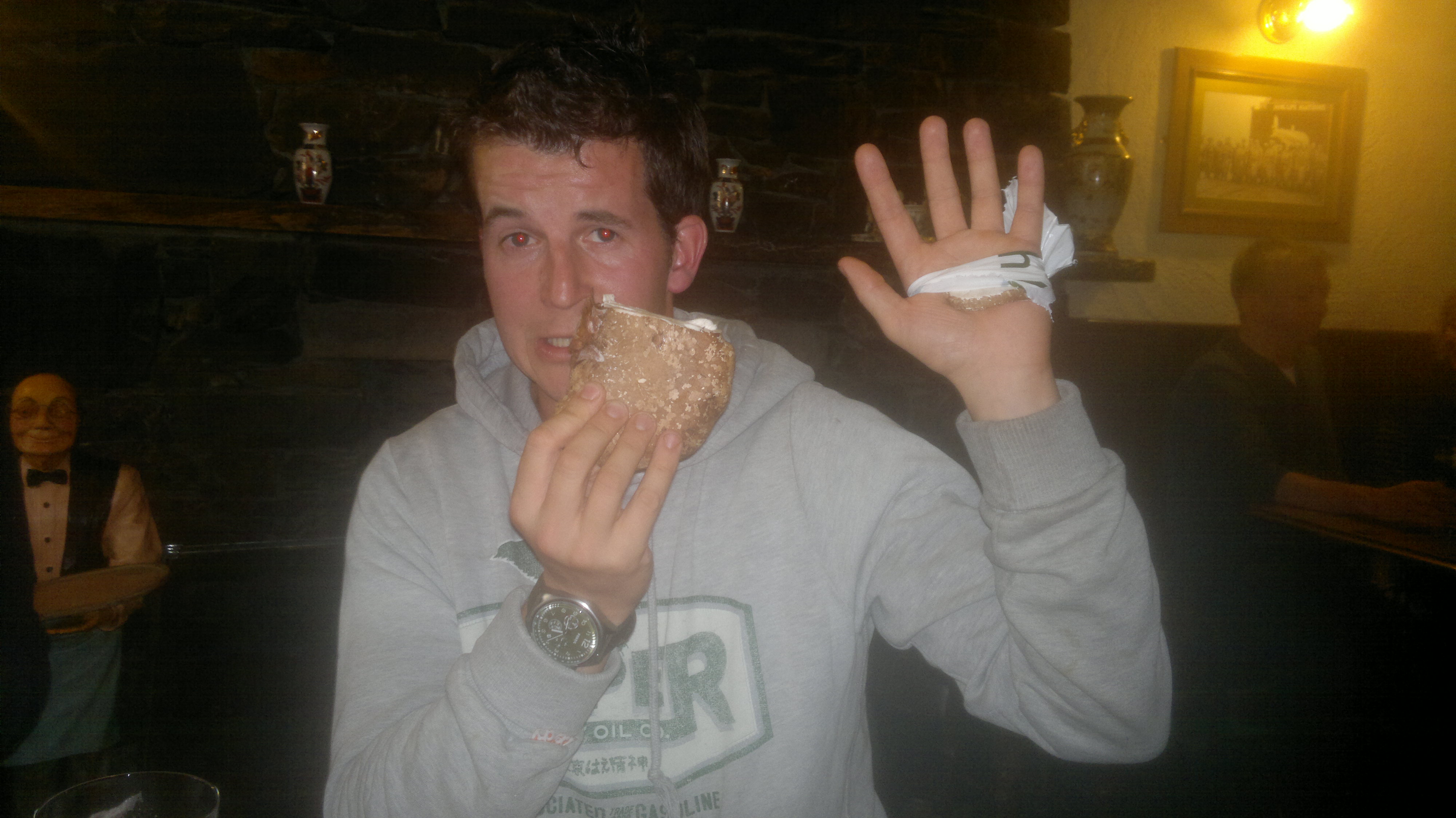