As part of a series of articles exploring attitudes to foraging in a world set on consuming itself, wild food teacher Mark Williams explores its potential role in the rewilding movement.

The Rewilding Movement has grown rapidly over the last few years. In the UK it grabs column inches for plans to reintroduce wolves and beavers, but it is about so much more than the headline acts. It represents a departure from traditional approaches to conservation that require steady human intervention for limited effect, such as, say, supporting chough populations, or waging war on grey squirrels.

Rewilding seeks to restore whole ecosystems rather than focussing on individual species. The wolves and beavers feature not because they are beautiful and exciting, but because they are keystone species that modify the behaviour of other animal and plant species – modifications that cascade down throughout ecosystems. The most commonly cited example of this is reintroducing apex predators such as wolves to modify the grazing behaviour of their prey – especially deer. Where deer feel threatened, they graze less in enclosed areas (eg.river valleys) and more in open areas. This allows saplings to grow and native forest to regenerate in a self-sustaining way – nourishing more layers of life below.

We are still some way from seeing wolves helping to sculpt ecosystems in the UK. Most rewilding projects start with much simpler, less controversial strategies – usually starting with excluding sheep and/or deer and removing artificial drainage. Rewilding doesn’t use any human-defined optimal point or end state: It is a long-term strategy that goes where nature takes it.

Carrifran, a valley in S Scotland, before rewilding in 1999 – a valley denuded by grazing

Carrifran 2015, with already much increased biodiversity

The rewilding movement is a breath of fresh air among some pretty stale attitudes towards land management and conservation.

The Rewilding Britain website places “people, communities and livelihoods” front and centre on its list of principles, recognising that humans, like it or not, are a deeply embedded keystone species – some have called us a hyperkeystone species. Rewilding Britain acknowledges human’s role as “stewards of a healthy natural ecosystem” and is working hard to dispel the idea that the movement values nature over humans.

Without human rewilding as a key part of the rewilding process, it is likely we would end up with some lovely fenced off reserves, where people can go and look at nature, before returning to their heated boxes to eat food from around the world. To me this just doesn’t join up.

Rewilding humans requires a paradigm shift from seeing “nature” and “wild” as something separate from humans. Long-term rewilding requires us not just to be stewards, but active, responsible keystone species. We can achieve this only by restoring the connection between ourselves and the ecosystems in which we are embedded.

“as key parts of the ecosystems we dominate, humans must be part of the rewilding. A rewilding of the self is a re-enchantment with the natural world, a re-awakening of our senses and intuition, a dissolving of the false boundaries between our atomised selves and our Earthly home. It is a restoration of meaningful connections with nature, our selves and each other”.

There are many ways to achieve this, all overlapping and complimentary: rewilding of land, of diet, of skills, of managing relationships, and of our spiritual connection to the earth. Foraging surely offers one of the most direct, rewarding routes towards restoring humans as part of nature, rather than apart from nature. Foraging develops deeply intimate relationships with the locations and species that nourish us. This quickly seeps into a spiritual connection with that place, that species, that ecosystem.

When The Association of Foragers were searching for an internal mantra to summarise our motivation, we didn’t opt for any of the many more obvious tactile benefits of foraging such as free food, nutrition, deliciousness or seasonality. Restoring Vital Connection is what we are about: reforging, healing and nurturing the crucial intimacy of humans with the natural world of which we are part.

Anthropocentric views of nature are dying as our climate grows ever more chaotic. New – or old – ways of defining our relationship with nature are necessary if we are to rediscover our place as responsible keystone species. This starts not by venting righteous keyboard fury about the loss of rainforests or plastic in our oceans, but by actively changing the way we interface with the society and attitudes that have brought these things about. Campaigning against climate chaos while eating stupormarket food is not joined up thinking. True and sustainable change can come about only by recognising and becoming intimate with the wondrous wild that is around us – and inside us – all the time. This can start through small, regular acts of intimacy – as simple as acquainting yourself with 5 square metres of forest floor, tasting a drip of sap from a spring twig, or harvesting abundant seaweeds to supplement our diet.

None of this is new. But for many of us it does need rediscovering.

“My mother said we had many relatives and we all had to live together; so we’d better learn how to get along with each other. She said it wasn’t too hard to do – just like taking care of your younger brother or sister. You got to know them, find out what they liked and what made them cry. If you took good care of them you didn’t have to work as hard.

I found out later by my older sister that mother wasn’t just talking about Indians, but the plants, animals, birds – everything on this earth. They are our relatives and we’d better know how to act around them or they’ll get after us” 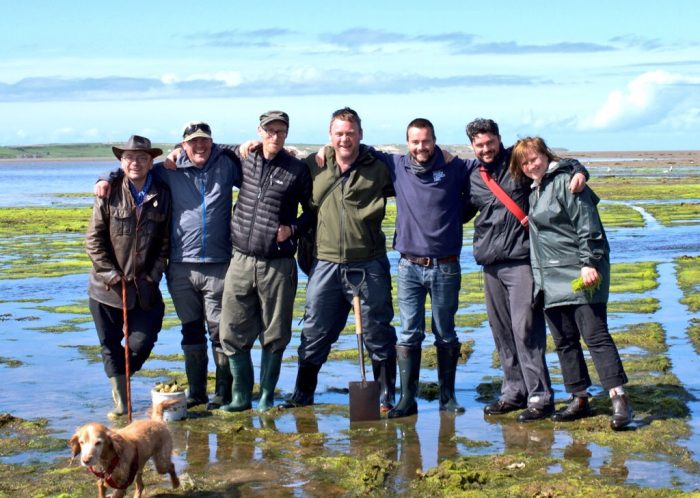