An unusual combination of a very low tide coinciding with unusually low temperatures was a small disaster for molluscs, but great gift to sea birds. I made this short video of the aftermath.

Since making that video, I’ve been wondering what the impact will be on spoot clam populations, and how I should adapt my (already very low-level) harvesting of them as a result.

I’m wondering if those that died were a sub-species that isn’t so often encountered, or nursery beds for my usual quarry. If the latter, they looked like year 1 of the 4ish year life cycle. So if it is a really significant event, it maybe won’t become apparent for a year or two.

Although it was an unlucky (for spoots) combination of weather and tide, it wasn’t especially exceptional (I expect we get a similar combination at least once every 5 years), so it may be that this sort of occurrence is just part of their natural pattern. Also, the tide wasn’t actually super-low, so not exposing the main spoot areas, when this occurred.

As always with foraging, the closer you look, the more you see there is to see! And the constant dance with nature develops new steps all the time…

Perhaps I should eat those spoot-fattened sea birds this year… 😉

Someone who was down on the shore the day after the event sent me this photo: 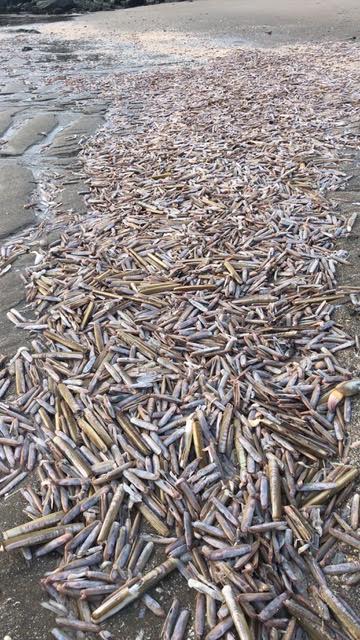 Razor clam carnage the day after the the low tide freeze 🙁