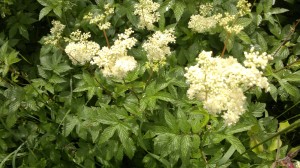 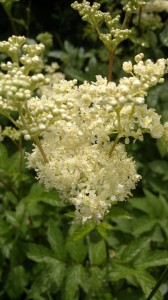 This is the prettiest and most fragrant of all hedgerow plants, its creamy yellow clouds of tiny flowers (I call them ditch-floss) spreading honey, vanilla and almond summery scents about the countryside. Be warned though – the old english name ‘courtship and marriage’ eloquently reflects how older specimens become a little bitter! The name meadowsweet is derived from mead rather than meadow due to its historical use in brewing. I add blooms to my sloe gin to add an extra fragrant note to the liquer.

Meadowsweet is widely used in herbalism for treating gastric complaints and headaches. These traditional uses are borne out in modern medicine. Salicin – an easier to digest version of salicillic acid, was first synthesised from spiraea ulmaria – the old latin name for meadowsweet which gave its name to Asprin.

A friend who has walked the Himalayas told me that where altitude began to cause him headaches, he would always find meadowsweet. After chewing a few mouthfuls, his headache would clear. Perfect!

In this respect, meadowsweet can be both the cause of, and solution to, your hangover. It also smokes quite well if finely shredded and thoroughly dried…I’m planning a wild booze and fags walk in its honour… 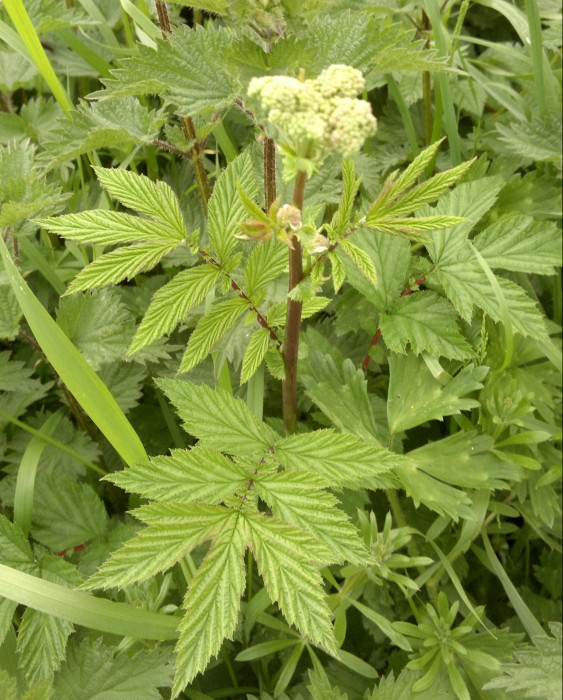 In spring the young leaves can be eaten raw or cooked as a green, though many find the flavour somewhat medicinal. I used to, but since working with some very talented chefs and barmen, I have learned ways of capturing melon, vanilla (courmarin) and almond (benzaldehyde) flavours from the foliage. If you can get past the initial TCP hit, there are all manner of deep, complex and deligtful flavours to be unlocked.

Try blitzing the leaves through yogurt or creme fraiche to capture their watermelon flavour and mask their less pleasant flavours.

The best way to capture the watermelon flavour in the leaves is to cold infuse them (separated from the red stems) into a simple syrup (1 part water to 1 part sugar). Leave them in the syrup for 12 hours, without heating at all,  then strain. With care, the delicate fragrance of any part can be cold infused into syrups, sorbets, ice creams and champagne.

To make meadowsweet blossom champagne, follow the recipe for elderflower champagne here, but double or treble the quantity of blossoms as meadowsweet is more subtle.

Also try infusing flowers into mead, or muddling them with a good gin to unlock their delights.

The freshly opened flowers picked on a sunny summer day are best. They also keep their flavour on drying, though ensure this is done quickly and thoroughly for the safety reasons noted above.