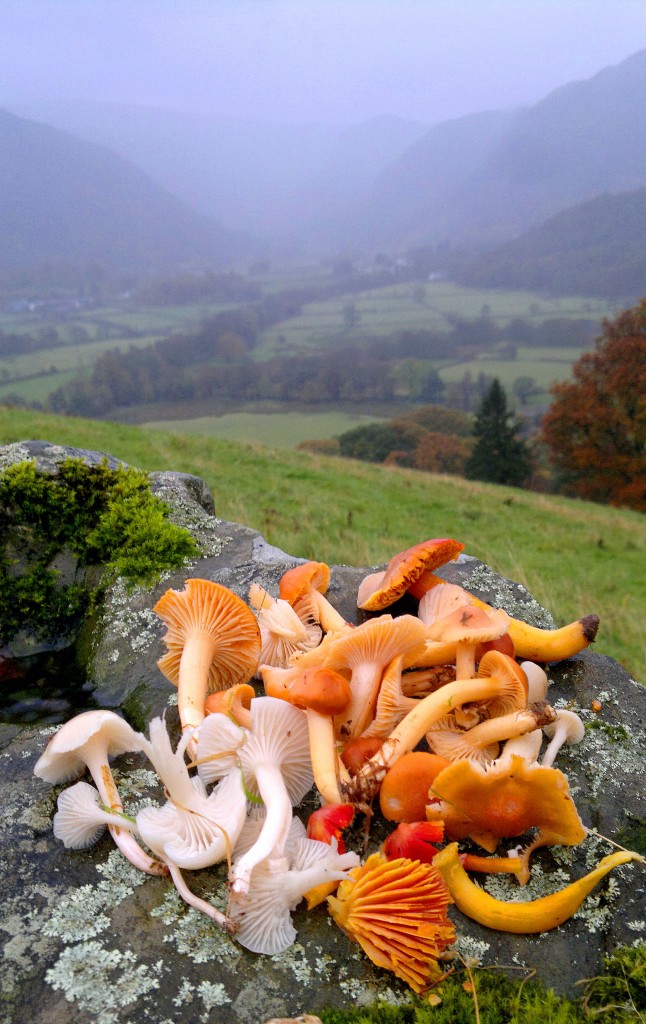 Waxcaps in the hillss above Borrowdale, Cumbria

Among the stellar array of colourful, sculpturesque and eccentric wild mushrooms, the waxcap family (hygrocybes) shine brightest. They are the rare, beautiful jewels of the fungi world, shining like rubies, emeralds and diamonds in late autumn meadows, lawns and graveyards. 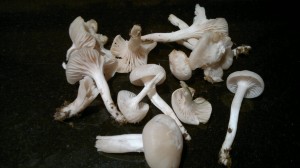 Not all waxcaps are edible (though none are known to be dangerously poisonous) and those that are don’t quite manage a place at the top edible mushroom table. The very waxiness that earns them their name, combined with a tendency towards sliminess in wet weather isn’t the most appealing combination. 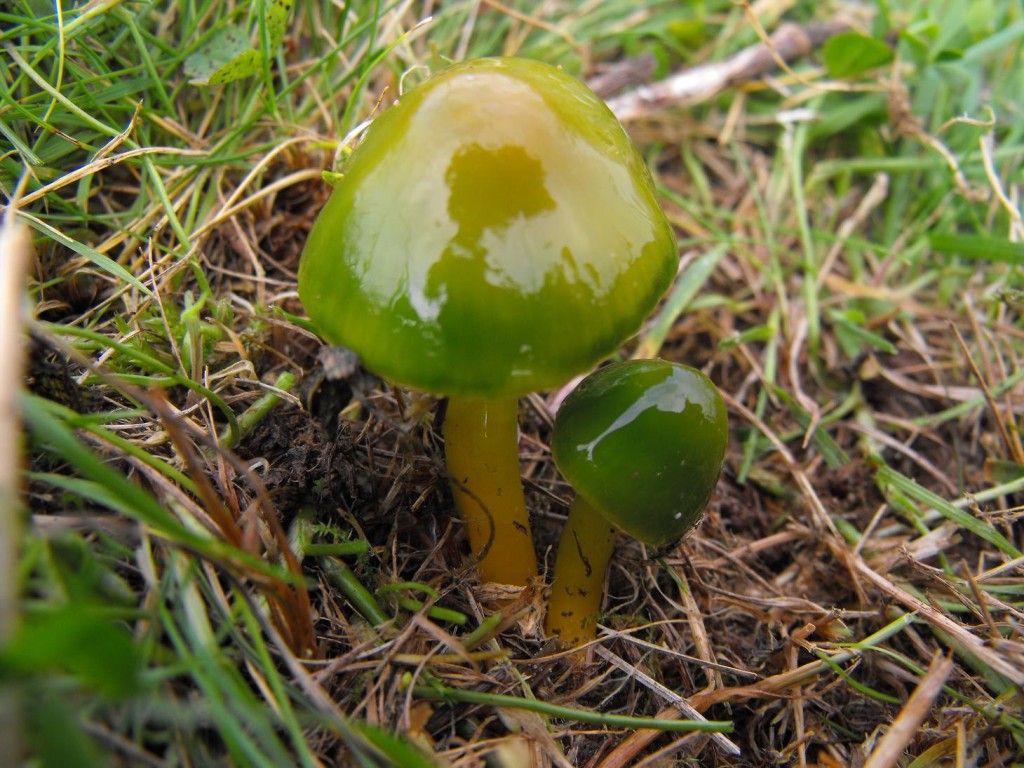 Waxcaps are under ever increasing environmental pressure as their natural grassland habitats are destroyed by chemical fertilisers. I find it quite irritating when ‘pub conservationists’ train their fire on foragers while ignoring insensitive farming practices that have destroyed countless hectares of natural habitat and with it more fungi, and quite probably species, than an army of foragers could ever disturb. Such is the depletion of natural pasture in the UK, the best place to find wax caps is often on regularly mowed lawns – which rather cocks a snook at unevidenced look-but-don’t touch attitudes to fungi conservation! 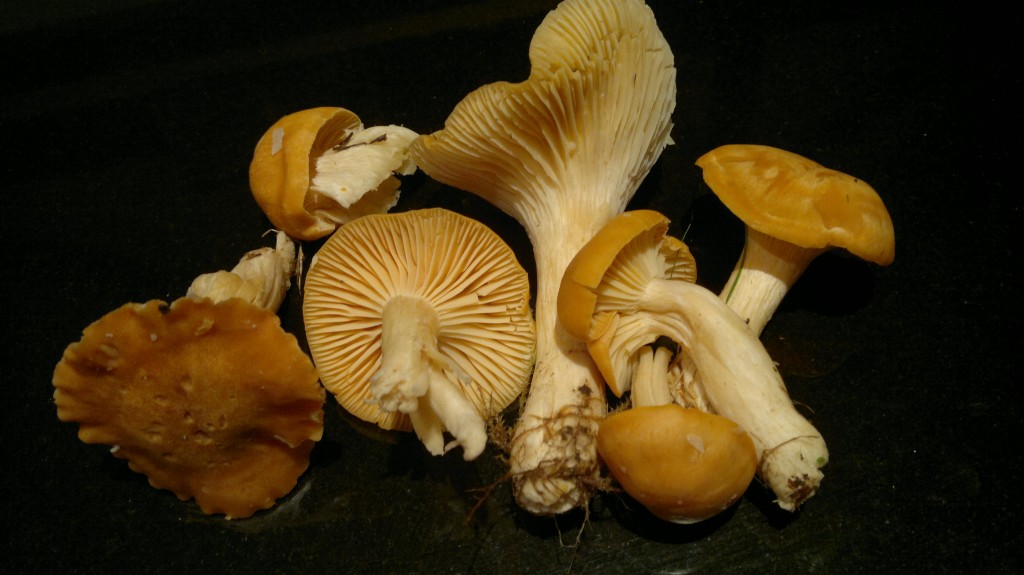 Nevertheless, for culinary and conservation reasons, I advocate eating only three species in any quantity: meadow waxcaps (Cuphophyllus pratensis, though many textbooks still list them as hygrocybe pratensis), crimson waxcaps (h. punicea) and snowy wax caps (Cuphophyllus virgineus). Do be careful if you want to pick snowy waxcaps – although they are very common, they are quite similar to a few very poisonous small, white clitocybe species – notably fool’s funnel (c.rivulosa) and c.dealbata (no common name). Scarlet hood (h. coccinea) are also reasonably tasty, but seem to me to be too scarce for anything but occasional tasters when a glut appears. 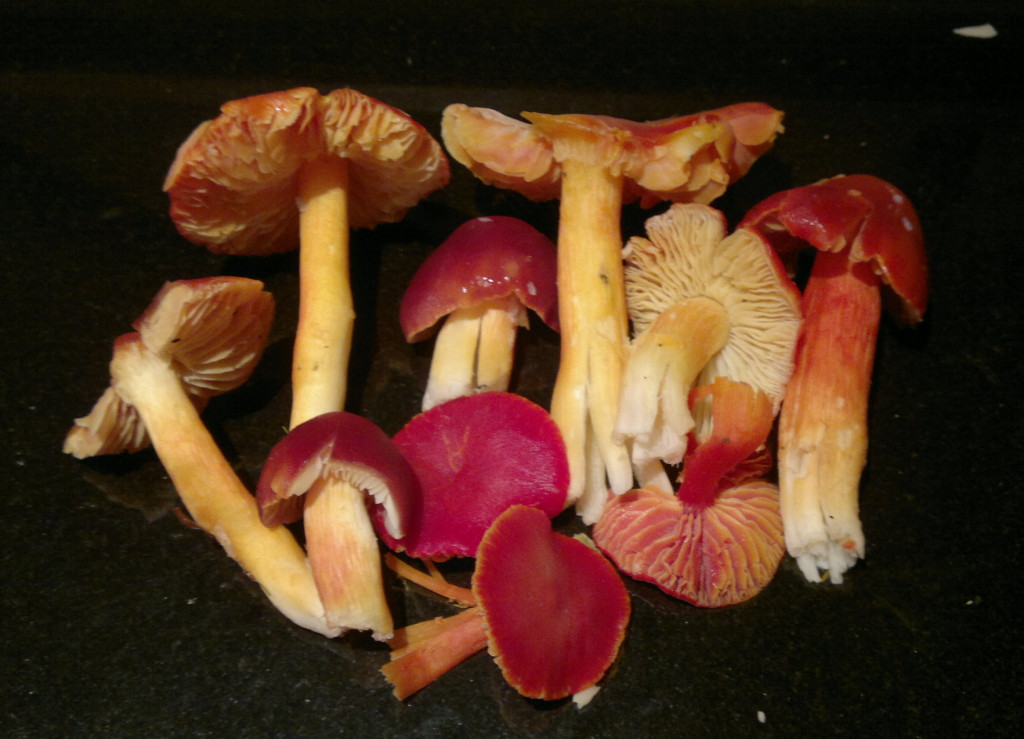 Waxcap’s bright colours and tendency to grow on neat lawns (stately home grounds are great hunting grounds) mean I have regularly been asked to ‘detoxify’ gardens of such perilous fungi by gardeners of suburban persuasions. Clearly it would be unkind of me not to remove the offending articles to my kitchen, and I never charge for my services… 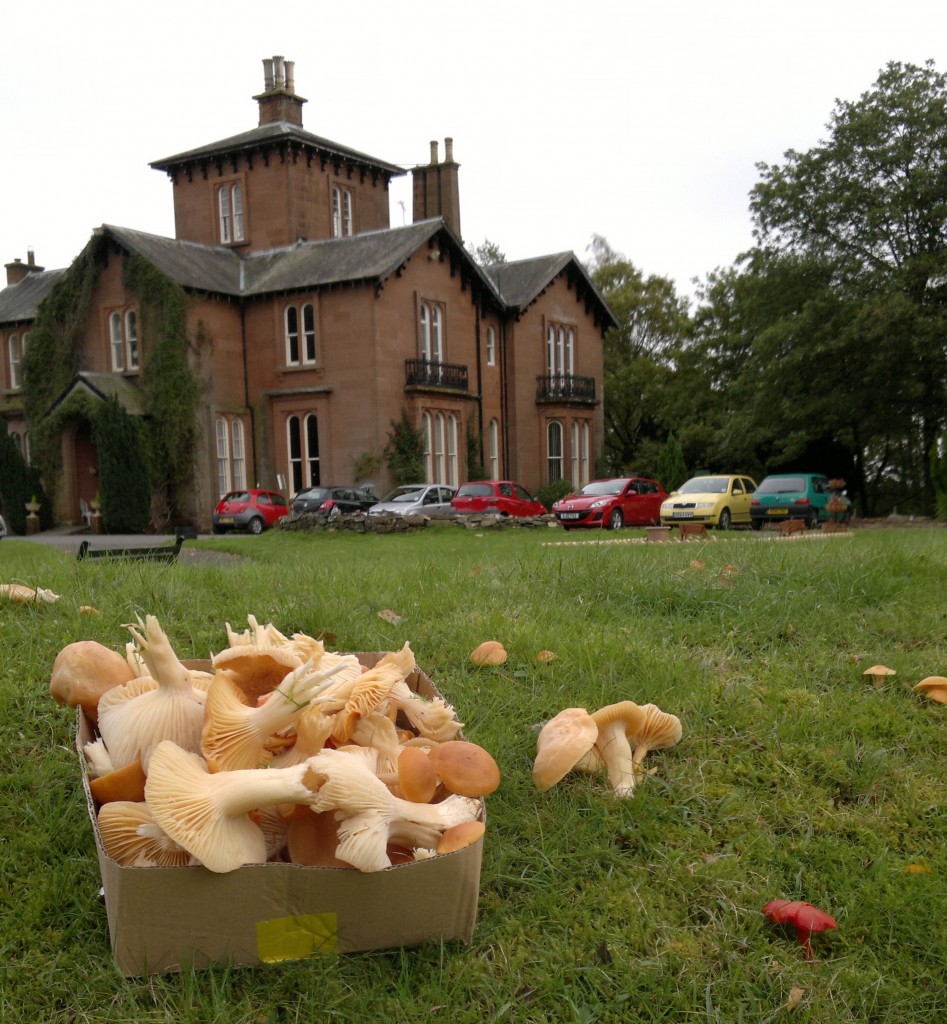 Meadow waxcaps (Cuphophyllus pratensis – also sometimes called buffcaps) have apricot to brownish-orange coloured domed (though occasionally upturned) caps (3-10cm) with paler stipes. Though waxy, they are only slimy in wet weather and the flesh is solid and white. In common with all wax caps, gills are widely spaced, some partial and some descending down the stem (decurrent). Their gestalt is surprisingly solid and weighty for their initial delicate, grass-nestling appearance and you will soon be able to harvest a nice plateful where they are fully grown. 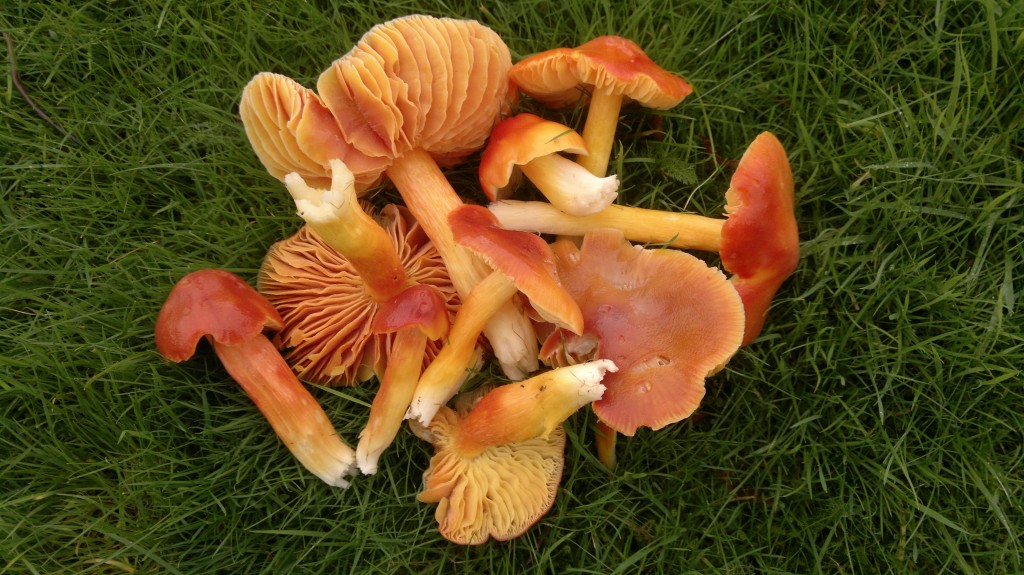 Crimson waxcaps (h. punicea) start off as domed, deep crimson buttons (2-3cm) but the greasy caps gradually fade through red to muddy orange as they open out (up to 10cm). Gills are yellow, stipe, fibrous, yellow, streaked with red and paling to white at the pointed base. If it seems quite small and lacks a white end to the stipe, you may well have a scarlet hood.

Where you do come across a flush of waxcaps (and you may well do this in towns and cities as well as the countryside) please enjoy these orchids of the mushroom world with restraint and without prejudice by taking some home to try if they are mature and thriving (they may very well be mowed the next day anyway!)

Should you come across waxcaps in unimproved meadows, please tread carefully! Some species are on the verge of extinction and are protected – to the extent where they even have their own excellent website – click here. 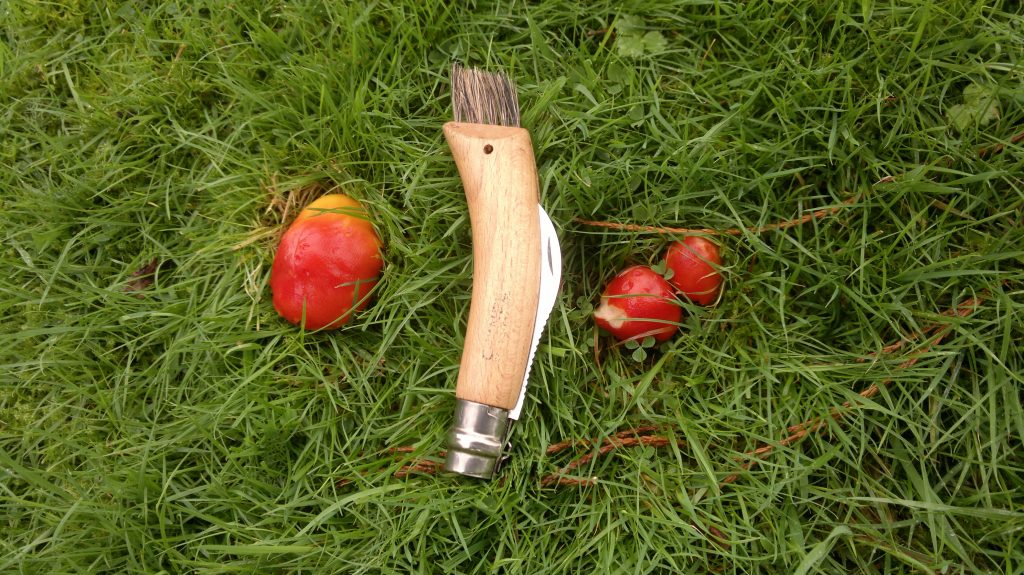 It is probably fortunate that waxcaps aren’t the tastiest of mushrooms, but they can make a decent and colourful addition to any mushroom dish. I have enjoyed them flambeed in calvados with hedgehog mushrooms and paprika, quickly sauteed and mixed (colours intact) through couscous and pilafs. They also pickle well and their slippery texture works well preserved in oil.

Here are some of the most charismatic members of these beautiful mushrooms. 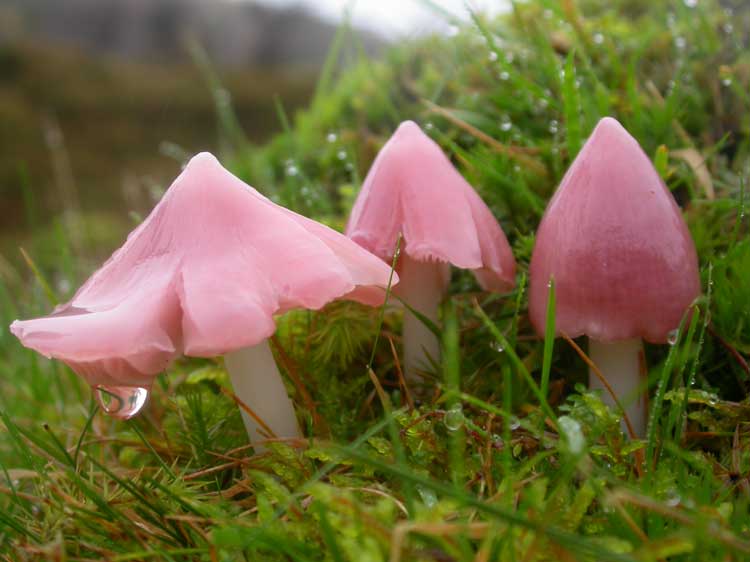 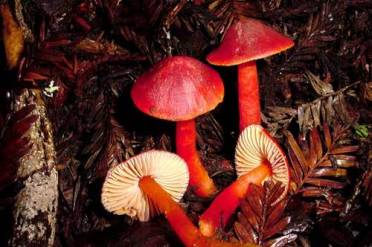 Scarlet hood – This picture was taken in the US, where waxcaps tend to grow in woodland rather than grassland. Nobody really knows why, but there is a suggestion that it is to do with ambient soil temperatures. 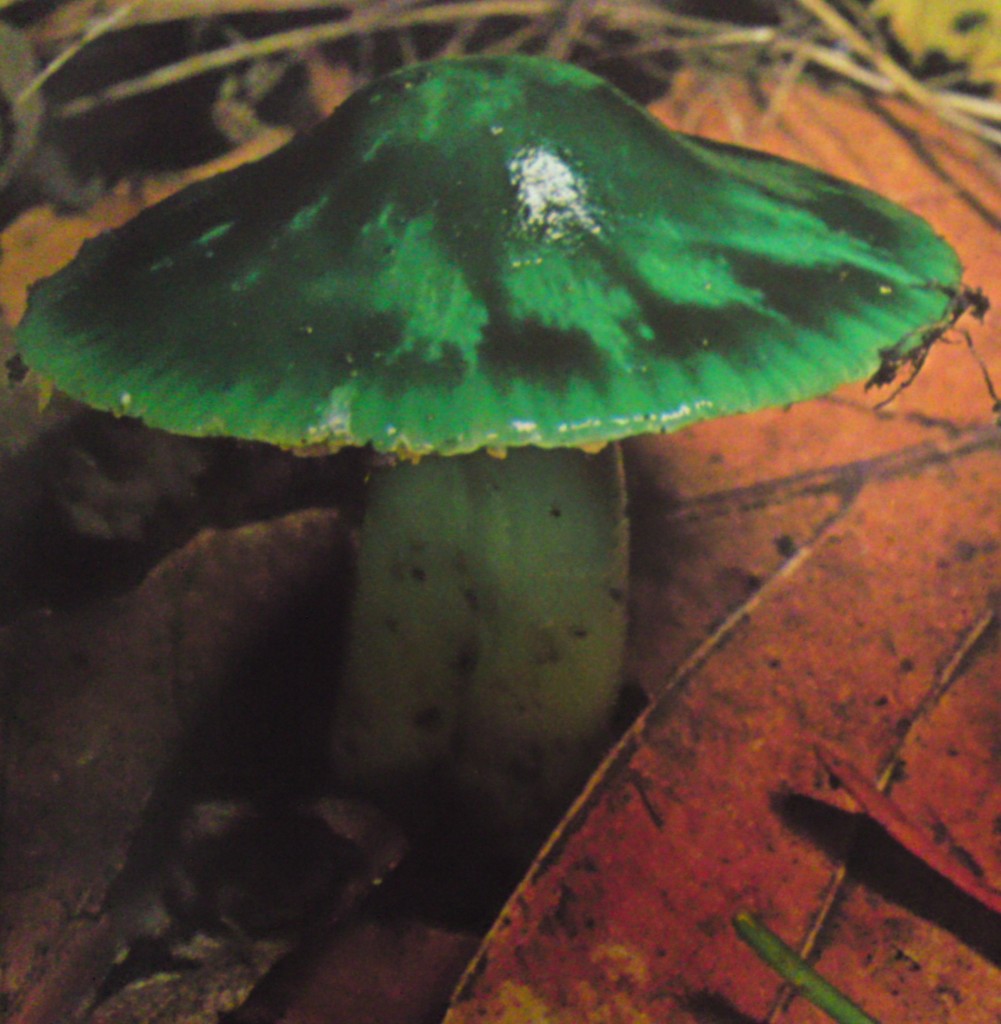 Unusual form of parrot wax cap growing in a US forest