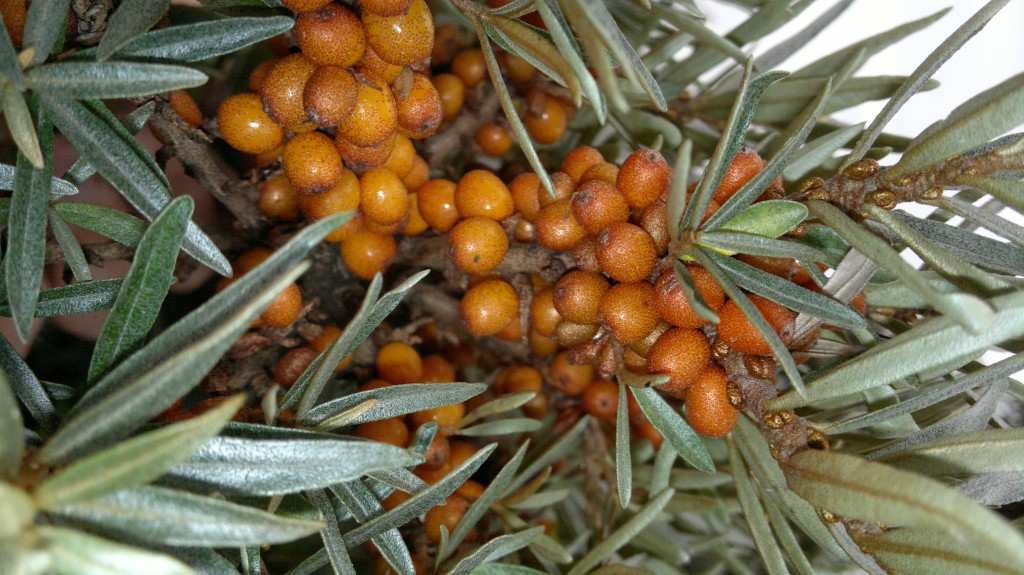 This is the most striking and delicious of all our UK berries in my opinion – once you get over their nose-scrunching acidity! They are exceptionally good for you, being rammed with antioxidants and vitamin C. They are mostly found coastally, but are starting to be introduced – or introducing themselves – to more inland locations. As you recalibrate your senses to the sharpness, you should be able to enjoy the wonderful vibrancy of the flavour – which gets the whole mouth dancing…especially if you chew a hogweed seed at the same time! 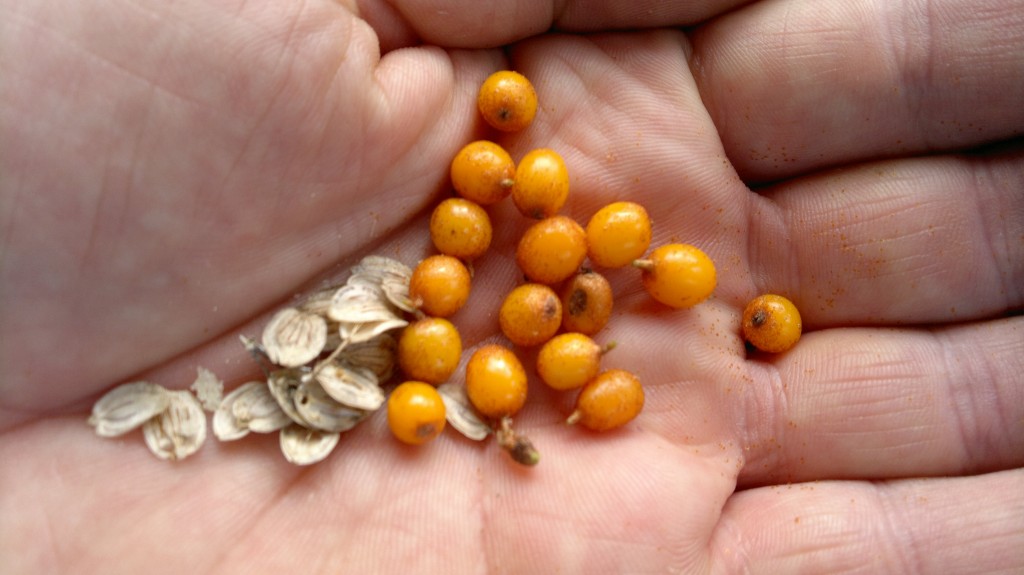 The berries look like the easiest harvest you could imagine, but are essentially fragile balloons, desperate to squirt their acidic innards in your eye at the merest touch.

Sea buckthorn aficionados fall into 2 camps: milkers and freezers. Milkers don souwesters, goggles and very thick gloves and “milk” the berried twigs into buckets. Freezers (like me) selectively prune the best twigs, take them home, freeze them, then collect the berries cleanly and easily. If done mindfully, spreading your pruning around, this has negligible effect on the plant or ecosystem – in fact it often improves growth.  Some people and organisations at some locations, consider sea buckthorn to be a problem invasive, so you may well be thanked for vigorously pruning it. 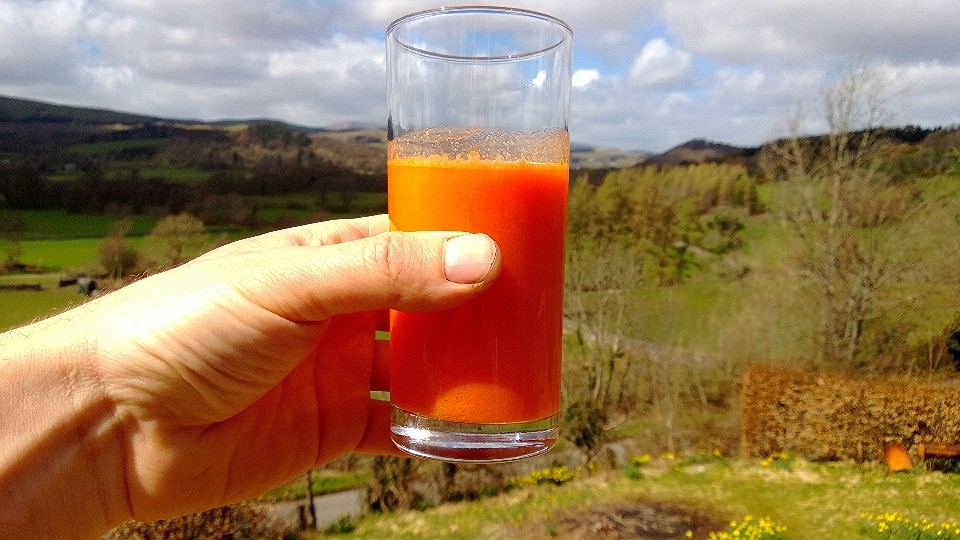 Not just colour sympathy – sea buckthorn juice with carrot juice is one of the finest, tastiest health drinks. Add a squirt of hogweed seed bitters to really set it off.

Its always entertaining to look back over old blogs. I wrote this in a very early instalment of my wild food journey. I haven’t found much more in Galloway since then, but have become quite adapt at incorporating visits to sea buckthorn-heavy bits of coast when i’m scooting about the country.

Chefs often pair sea buckthorn with white and dark chocolate in desserts. The berries make an excellent jelly with crab apples and a judicious amount of sugar, and also a tasty chutney. 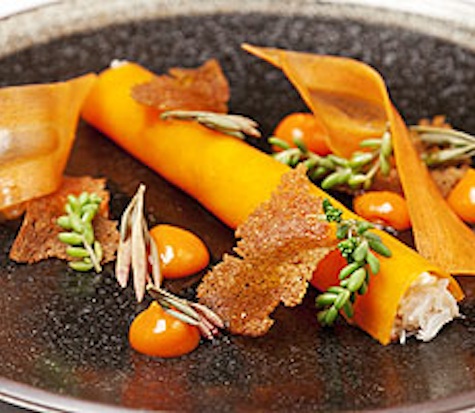 There are a great many claims for the health benefits of sea buckthorn, but most are currently lacking in sound corroborative research. It does seem likely however that it can promote health in some or all of the following ways (Note: Sea buckthorn is usually taken medicinally as an oil extract of the berries, seeds and (occasionally) leaves. This has the effect of concentrating its beneficial constituents, but you can still gain these by including sea buckthorn berries and juice in your regular diet):

Read more about these and more potential benefits of sea buckthorn here.

Remember, there are no miracle foods, and good health is best supported by biodiverse eating. I like to juice sea buckthorn berries and drink them – 50/50 with carrot juice if i’m feeling healthy, or in a wild whisky sour more likely… 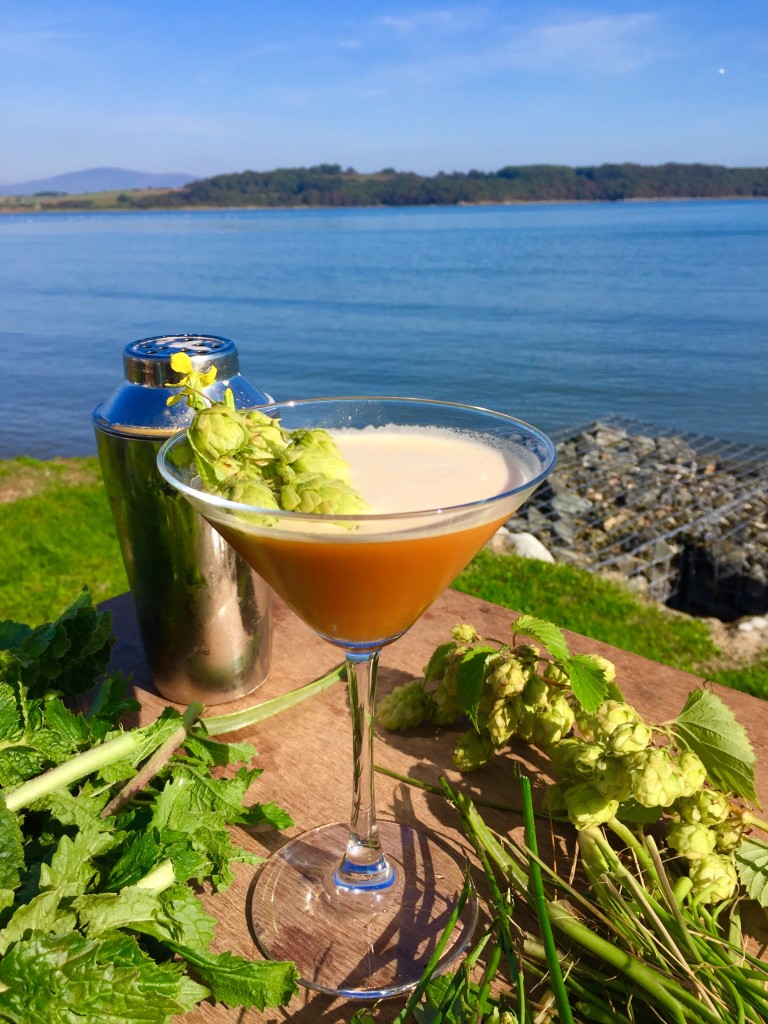