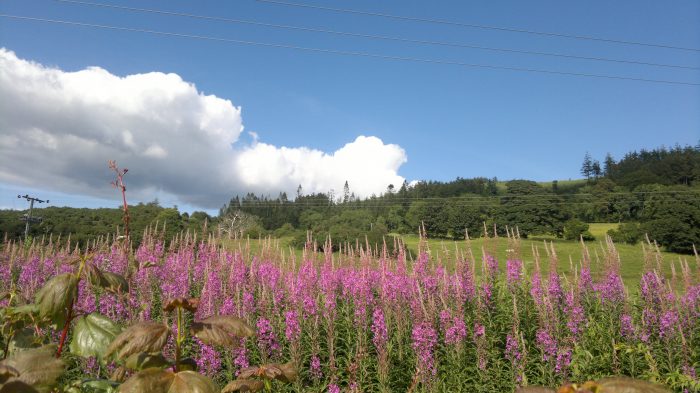 Lookalikes – Although it is not really very similar at all, when harvesting you should stay attuned and be careful not to gather that other common pink flowering plant that is very poisonous, foxglove. There are other closely related willowherbs, notably greater and lesser willowherb. These lack the distinctive flowering spires, and can be used in similar ways to rosebay willowherb, though they are not generally considered so tasty. They tend to favour riverbanks and wet ground.

Edibility – Multiple edible parts/stages: Very young shoots 3/5; Pith of mature  pre-flowering stems 3/5; Flowers 2/5; Mature leaves and flowers fermented as tea 4/5. The roots have also been used as food, which suits such a hyper abundant plant, but this strikes me as too efforty unless you are in a survival situation.

Distribution – 5/5 – Very common.  The small airborne seeds are carried for many miles on the wind and in the vortices created by trains and cars.

Ecology – An important pioneer plant, colonising damaged and disturbed ground. Usually succeeded after about 5 years. Seeds can remain dormant in soil for many years, and do well in mineral soil stripped of organic top layer by (eg) fire. Pollinated by bees and especially moths, the larvae of which also feed on the leaves.

For such a prolific, quick growing, fast-colonising plant, that has so many seeds lying dormant in the soil at any given time, its hard to imagine anyone getting too worried about over harvesting. In many areas this plant could support commercial harvesting, and indeed in areas of Canada Fireweed Syrup is a healthy cottage industry. But foragers will be the first to notice, when gathering the flowers, just how important these plants are to bees, and bees are only their most noticeable visitor – moths visit them at night, using them as both food and nursery. Still it would be very hard to make any noticeable impact (well…you’d need to be an awful lot more patient than me!). Nevertheless, this is a good plant with which to practice what I call The 100th Portion: take only 100th of what you encounter in any given area. You are probably wondering how to gauge 100th. Start by visualising 1/10th of the what you see in the area you plan to harvest from – 1/10th is about the smallest fraction humans can easily get a feel for. Then imagine what 1/10th of  your imagined 1/10th looks like. You are picturing 100th. 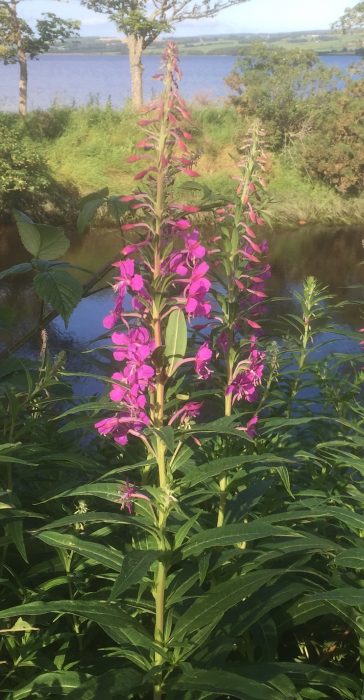 Rosebay Willowherb flowers and leaves, late July, Scotland. Note how the flower buds open in succession from the bottom to the top of the spire

Rosebay willowherb, or fireweed as they call it over the pond, is the provincial plant of Yukon territory in Canada, where enormous drifts of their pink flowers often colonise the sites of large forest fires for as far as the eye can see. Its a truly breathtaking phenomenon, creating a shimmering pink haze that once seen is never forgotten. This important ecological pioneering role is echoed in it other English names of bombweed or blitzweed, after it was the first plant to make home on World War II bombsites..

It is well loved by my relatives in Canada for making a pink syrup (and from that, a jelly) from the flowers in summer. I know some people value pretty pinkness over flavour, but personally I think the flowers are its least exciting food use. Having said that, my friend Peter is a fan, and reckons that if you use enough flowers you end up with a fruity tasting syrup. You can read his recipe below.

Personally i’m more interested in the young shoots in the spring, a decent wild vegetable that can be gathered easily in large quantities provided you take a note of their  colonies the previous year when they are showing off their glorious pinkness. Return to these locations in late March or April of the following year to catch their new palm-tree-like shoots emerging, with their tender pink stems. You need to be on the ball, and anticipate this step of nature’s dance, as they are quick growing and soon move from tender and juicy to tough and fibrous. Their season of deliciousness is often no longer than two or three weeks. 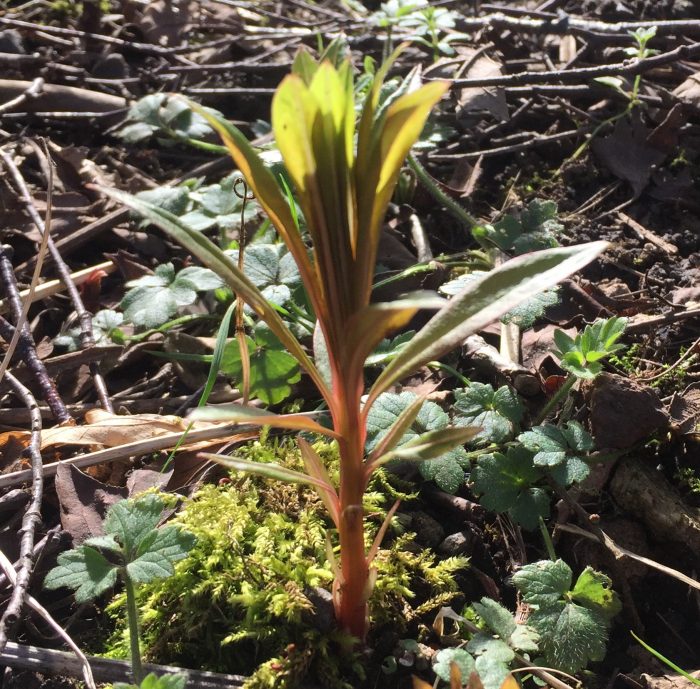 Try to catch them while most of the leaves point upwards, and before too many start to flop down. The best places to gather them are where they have forced their way up through leaf litter, which makes their pink  stems grow long and tender.

They tend to start appearing at about the same time as common hogweed shoots, and while they certainly aren’t in the same league in terms of flavour, they do partner up nicely in stir fries, a milder flavour next to more pungent spring vegetables. Peeled they are pleasing raw and good for dipping in wild garlic pesto or hummus. Think of them in the kitchen as along the lines of a mild baby asparagus shoot – though not so tasty. If you miss their short season of tenderness, or stumble on a patch that happens to be a bit stringy (which happens) a bit of peeling may keep them worthwhile. 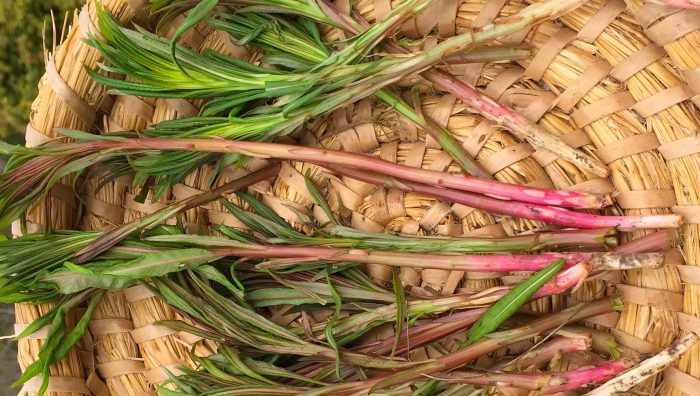 All too quickly the stems are too big and fibrous to enjoy as a vegetable, but the mature stems, up to when the flower buds start to open, can be split down the middle and their sweet, cucumbery pith scraped out and eaten as is, or used to enrich soups, stews and smoothies. 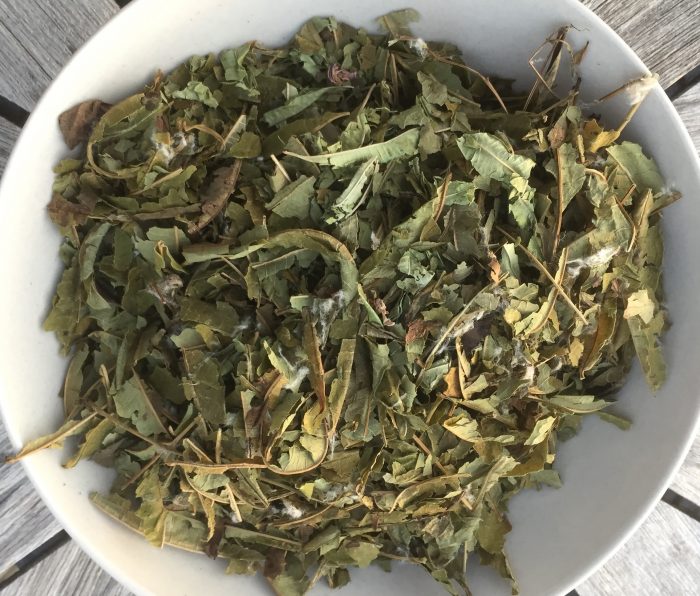 Perhaps their tastiest use is to make mature leaves into a richly flavoured black tea, often known as “Ivan’s Chai” as it was (and still is) widely drunk in Russia. It has been used traditionally to treat all manner of ailments, but I drink it mostly because its tasty! Its very easy to make: 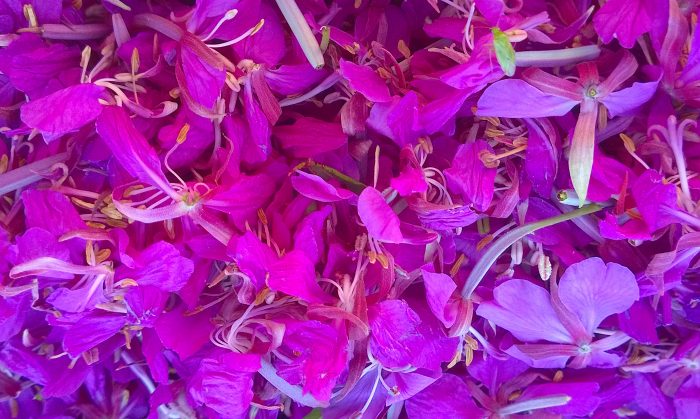 As I mention above, pinkness aside, I find the flowers the least gastronomically interesting part of this wonderful plant. But several million Canadians can’t be wrong, and certainly not my friend and fellow foraging teacher Peter Studinski  , who insists its well worth the trouble if you follow his recipe. I think the key is to pick a gigantic number of flowers, and I just don’t have the patience. Here is his recipe in his own words:

I’ve found that a carrier bag full of flower heads makes just over a litre of syrup. You need to bring the flowers to a boil. Infusing in warm/hot water or a sugar syrup doesn’t work and just gives a weak syrup.

Strip the flowers off the stems. I also added some of the unopened flower buds at the top of the stem.

Cover the flowers in plenty of water. I had about twice as much water to wet flowers. More water is better than too little as you need to reduce it down anyway.

Bring this to a summer. As soon as the colour comes out of the flowers (they go white/grey) strain the hot liquid off. Don’t leave the flowers in otherwise it’ll go very bitter. The liquid will be an unattractive brown colour.

Hard boil the liquid down to reduce it. As it starts boiling add some lemon juice.  Here’s the trick – the lemon juice turns the colour to a deep red as well as adding flavour. Add enough lemon so you see a colour change. The colour will deepen as you reduce. Add more later to taste. I also added a little orange zest.

Reduce the liquid to about half or to whatever level seems to taste best. I then put this trough a coffee filter to get all the little bits out. Then add sugar to taste. I also added a couple of pinches of salt, but I like a bit of salt 🙂

Once you have made a syrup, its easy to flavour a jelly with it.