This is one of the safest of the carrot family to identify, and certainly the most common. Its serrated leaves are oval with a point and always grow in 3 groups of 3 from a grooved stalk, close to the ground, before sending up their flowering stems. Umbels of small white flowers appear in late May or June. It has a celery meets lemon/parsley sort of flavour, making it a natural partner for fish, and is good as a pot herb or salad ingredient. Don’t let anyone tell you its just a nasty weed! That said, you should certainly stay aware of the dangerously poisonous members of this family, especially hemlock water-dropwort and hemlock and you can arm yourself with a closer understanding of the whole family by reading my Introduction to the Carrot/Apiaceae Family for Foragers.

Probably due to its liking for graveyards, or possibly its historic use by monks, ground elder is also commonly known as bishop’s weed. It has close carrot family relations throughout the world, including ajwain which is widely used in Indian cooking. This sometimes also goes by the name of bishop’s weed, though it is a different species – trachyspernum ammi. The spice itself comes from the seed pods. Ground elder seeds can be used in similar ways, though are not so pungent. Read more about our native spice rack here.

In the UK, ground elder is best eaten between February and June when it flowers, though its at its best as a salad ingredient in March/April, before its leafy parts are bigger than the palm of your hand. Once it starts to flower the taste becomes less pleasant and it has occasionally been reported to have a mild laxative effect if you eat lots of it, post flowering! If you are husbanding a patch (as opposed to trying to destroy like most gardeners!), nipping off the flower heads keeps them tasty for longer. Ground elder will just keep coming with almost endless numbers of tender leaves if you harvest them regularly. 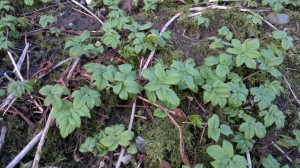