As foraging grows ever more popular some voices question its impact. In this series of articles, foraging teacher Mark Williams explores how it fits into a society set on consuming itself.

Gathering wild ingredients to sell rather than to consume one’s self gets a lot of stick – even from foragers. I have been on both sides of this divide myself. In my youth I sold chanterelles for beer money. Later I worked as a commercial forager/salesman, before choosing to specialise in teaching rather than harvesting. Poacher-turned-gamekeeper, for a while I disparaged commercial harvesting. Nowadays, while I still think foraging for one’s self and family works best, I now see no reason why considered commercial harvesting should be a problem per se. 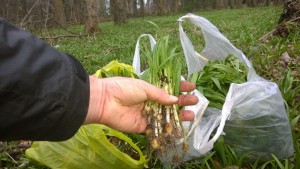 A great business opportunity for someone: Harvesting few flowered leek (considered a problematic non-native invasive species by some) from a 6 acre patch

Let’s be clear – hardly anyone in the UK currently makes a full-time income from wild harvesting. Please, please disregard tabloid press pieces about “hoards of Eastern Europeans pillaging our forests” for vast profits. They are sensationalist, never based on evidence, and often racist in tone. If you get your information from this sort of press, and take it in any way seriously,  you’d probably be better off listening to Nigel Forage!

I have unpicked this question at length here, but its worth repeating this illuminating example from a friend who forages for pleasure and profit in the New Forest:

“A few years ago when I was out in the forest I was “tipped off” by a couple that there was a gang of East European pickers nearby with walkie talkies. I’ve never seen gangs of pickers before so I went looking. It turned out that the “gang” was in-fact two Polish families out mushroom hunting and the “walkie talkies” were rather old mobile phones. They stopped for a picnic and I had a chat with them. I guess it helped that I’m half Polish but they certainly weren’t picking to sell. We talked mushrooms and I saw that they had about 10 ceps and a dozen assorted boletes between them. Hardly a lot! They were just out enjoying the autumnal sunshine doing what many British people would like to be able to do but don’t have the knowledge“.

Its also worth having a look at this photograph that is churned out every autumn by foraging nay-sayers as “evidence” of outrageous behaviour by commercial fungi foragers. I believe it was originally taken in Epping Forest, but has since appeared in dozens of articles with no connection to that area. 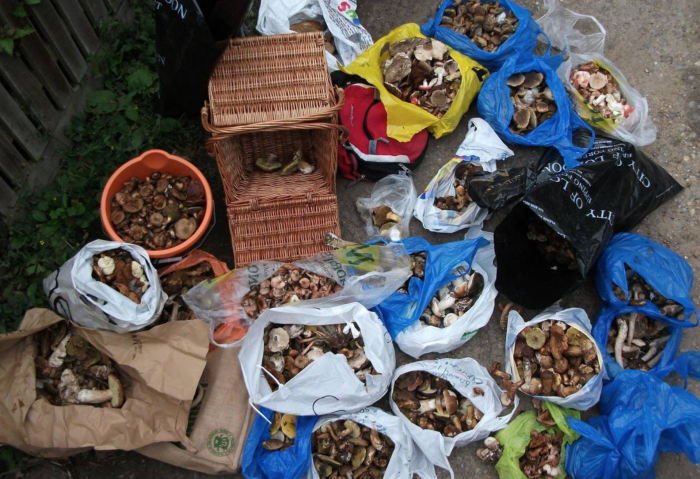 Wheeled out every year as “evidence” of over harvesting – but what does this photo really tell us?

At first glance, and with a limited knowledge of fungi,  you could be forgiven for thinking this is an outrageous amount of wild mushrooms to remove from a forest. But here are a few thoughts:

Sorry to obsess over this photograph, but my intention is to make a wider point: a little knowledge of a subject in the form of scientific research and/or experiential insight is way more valuable than knee-jerk reactions to what looks, or does not look, right to inexperienced eyes.

Here is a comparable photo of what I harvested over two days and many miles in predominantly plantation forestry, using my 30 years of knowledge, experience and connection to the land. I had no interest in selling any of it. This is an important annual harvest for me, which I preserve in many different ways and use to feed family and friends throughout the year. I don’t buy a single commercially grown, hothoused, plastic-packed mushroom all year. If someone stacked up an average families supply of commercially produced button mushrooms for a year and took photo of it, I might find that pretty excessive. But I make no apology for this wild harvest. 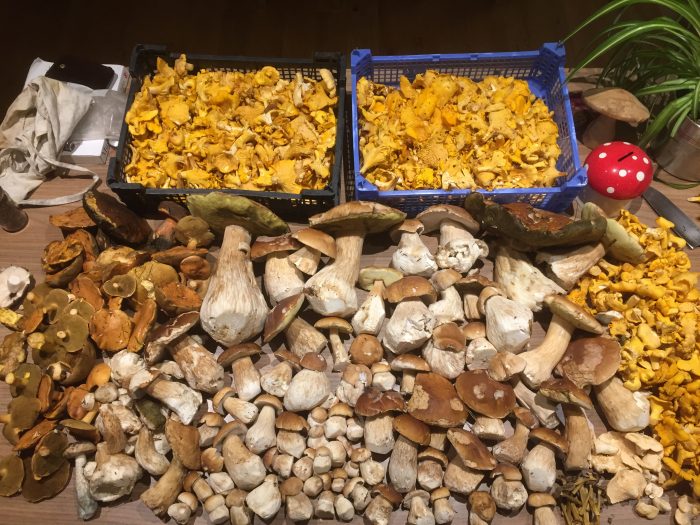 I’m not suggesting that nobody forages for financial gain, but the vast majority of money made from wild harvests is through seasonal piecework, or more often people selling surplus from their personal harvests direct to local businesses. This is seldom well paid given the time, knowledge, graft and skill involved. For others, wild harvests are the basis, or more likely a strand, of micro or nano businesses, where value is added to abundant harvests – eg. hedgerow jam, elderberry liqueur, botanical spirits, pop-up dining experiences.

Personally I’d rather give my money to nimble, high quality, rural, local micro-businesses than to supermarkets and agribusiness. Given that all food has consequences, isn’t this a better food choice in the interest of rural economies and minimising our overall impact on the natural world? 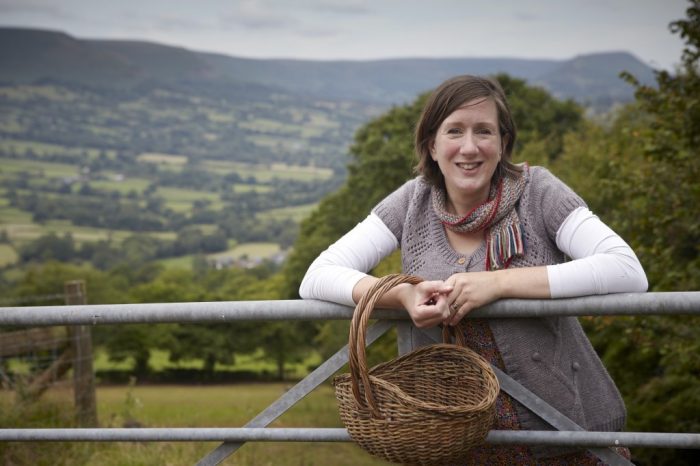 Businesses that forage their own ingredients from the wild often give back way more than they take. My friend Rupert who runs a fantastic wild food pop-up restaurant around Edinburgh was recently sworn and shouted at by a passer-by while picking primrose flowers for making wine. They were so busy being furiously righteous that they couldn’t hear him explaining that he’d recently planted several hundred primroses around the locale. (For some reason many myths circulate around the legality of picking primrose flowers: for the record, they are super-abundant in most areas and there are no prohibitions on picking them, other than than an arcane bye-law in Northern Ireland). There are countless examples of the reconnection and responsibility being exhibited by thoughtful, nimble wild food businesses. Despite using many island botanicals, The Botanist Gin takes the conscious decision not to harvest Islay juniper due to its scarcity, but through The Botanist Foundation is working to reintroduce it around the island. 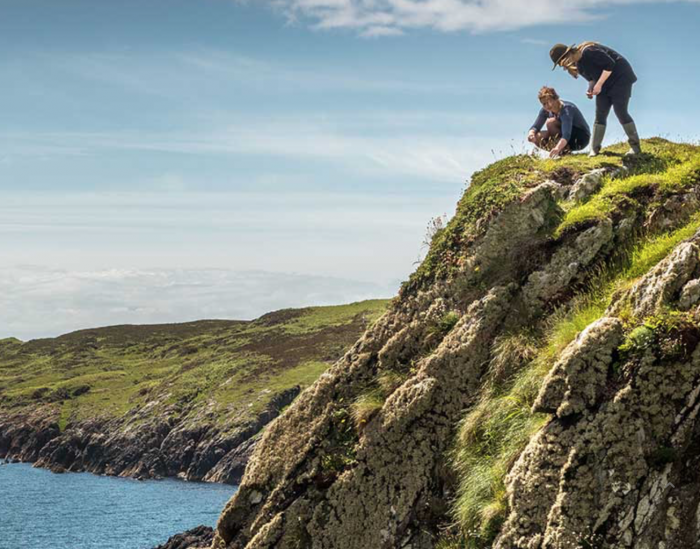 Nurturing prostrate juniper on Islay, where it is under threat not from foragers, but by extensive, subsidised, sheep grazing.

Commercial foragers are subject to the law of the land, which infers that landowner’s permission should always be given for commercial harvests. Miles Irving – a wild food supplier and well respected author from Kent – is looking to challenge some of those creaky old laws which seek to erode basic human rights through contrived ideas of “ownership”, partial understandings of wild species and intransigent attitudes to new ways of relating to nature. You can read about his battle with Natural England here.

Relationships between land owners and foragers need not be strained or adversarial, and are more often than not warm and mutually beneficial. Win-win acts of stewardship, such as thinning a riverbank of reedmace, cuttiing japanese knotweed or pulling ground elder are common.

There may come a time when certain wild harvests are so popular that some species come under ecological pressure in some locations. If that happens I expect it will be the nimble diets and attitudes of foragers and foraging businesses that will be suggesting alternative harvesting strategies and campaigning for more green space, long before the cumbersome, grinding wheels of law, consumerism and traditional conservation organisations catch up.