Boletus edulis (also the closely related and equally delicious Boletus pinophilus and Boletus reticulatus); AKA Porcini (Italy & commonly UK too nowadays), Penny bun (UK traditionally, but generally cep from the French name Cepe is used), Steinpiltz (Germany), King bolete (US) (N America has more very similar boletus species (eg. B.rex-veris) that are often lumped in with Boletus edulis as they are very similar and equally gastronomic. These are not covered in this post).

The cep is the king of edible mushrooms. No food, fungal or otherwise, comes near it for flavour and texture and when you find a firm young penny bun, or ‘bouchon’ cep as the French call them (after champagne corks), there is an irresistable fairytale beauty to them which is both beautiful and seductive. 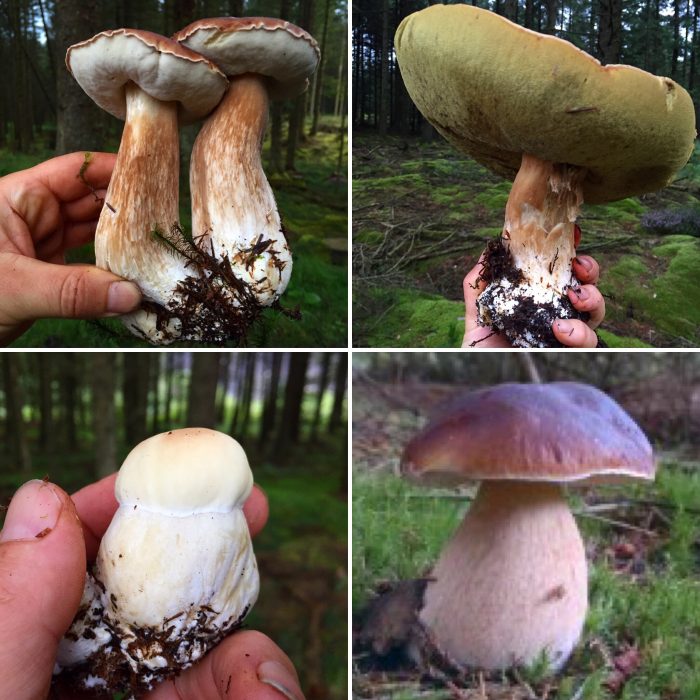 Boletus edulis grow rapidlyy and erratically. All these ceps were picked in the same area at the same time. Bottom left is a freshly emerged “bouchon” (champagne cork) that is yet to colour up. Note the pores on the underside of the cap, changing from pale to olivaceous yellow as the mushroom matures.

In prime condition, ceps are one of the few wild mushrooms that I recommend eating raw, though if you have never tried them before, you should start with only a tiny amount. Fortunately a morsel is all you need to intoxicate your senses. The texture manages to be both crisp and succulent, while the flavour is one of chestnuts, musky woodland, even a hint of smokiness, but overall, just very mushroomy, with an almost parmesan-like umami mouth feel! The combination of deep intensity and aromatic lightness is fantastic. 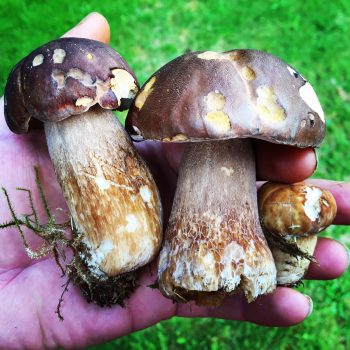 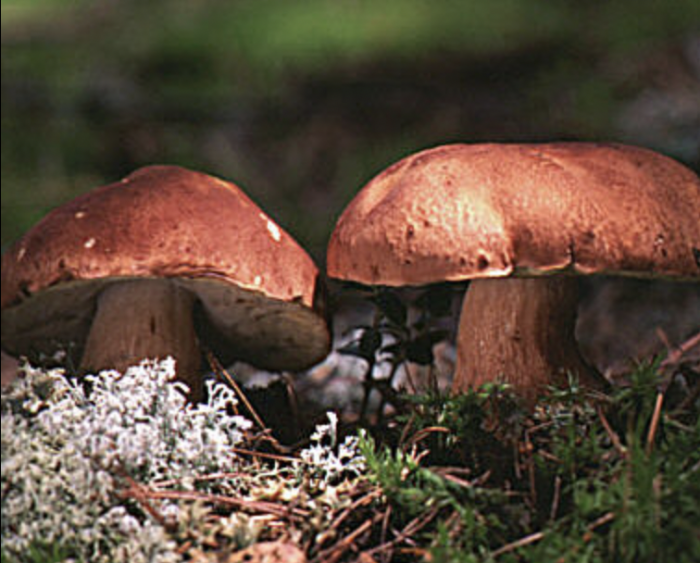 Boletus pinophilus – Pine ceps, have a ruddier complexion and are found only under conifers, especially pine, but also spruce and fir. They are just as delicious as, though  less common than, b.edulis, which can also be found in similar habitats. More common in Scotland, scarce in England. Image: WikiCommons

If you think all this sounds unlikely and exaggerated, you really should try one. And don’t take my word: witness the French and (especially) Italian love affair with this mushroom. In season, market stalls will be bursting at the seams with fresh specimens and most rural Italian towns have their own fungi festival each autumn where prizes are awarded for biggest/prettiest/most like finder porcini. Even in winter and spring no self respecting grocer will be without a huge box of dried porcini.

Dehydrating ceps in the sun. I usually use a dehydrator for speed and convenience, but on the rare occasion Scotland’s weather is good enough, I dry them in natural sunlight

Ceps lend themselves extremely well to drying and young firm specimens also freeze well, so they are available commercially in some form or other all year round and are a widely traded commodity. Although they lose their texture when dried, the process actually intensifies the flavour, and there is the added bonus of the water used for reconstituting them making excellent mushroom stock, though generally I prefer to just add the dried chunks to whatever stew, sauce, soup or gravy I am making and let them reconstitute in the pan. Dried ceps can also be ground into a fine stock powder that will turbo-charge any dish with rich, deep umami, or can be sprinkled on dishes in the same way as parmesan cheese. 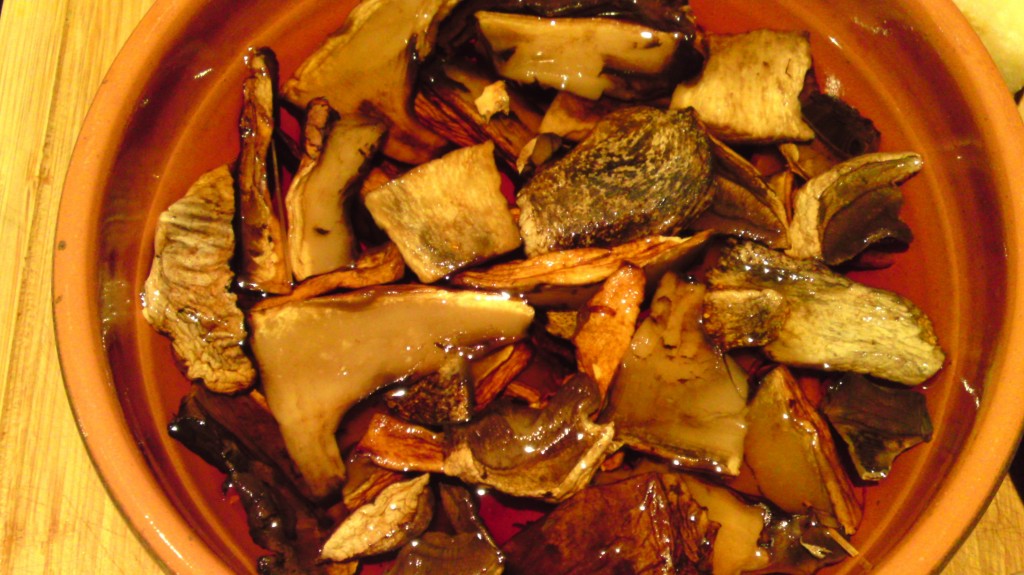 You may well be thinking that this is some rare, exotic species, but they are in fact, not hard to find in Scotland and much of the UK. It is a sad reflection on our mycophobic culture that while they are cherished and celebrated in Europe, they are more likely to be ignored or kicked in the UK! Ceps are mycorrizal mushrooms, meaning that their parent mycelium (the underground network of microscopic fibres that permeate topsoil) happily unites in a mutually benificial relationships with tree roots. Ceps are what I think of as ‘loose’ mushrooms in so far as they can associate with a variety of tree species. Such infidelity means that you can regularly find them beneath beech, birch, pine and spruce trees from late August to November (see notes above for variations in species).

Tracking down such an esteemed mushroom can become a bit of an obsession, and experienced hunters will have all their senses finely attuned to a complex interplay of influences:  heat in the ground (hot summers are good, but only after the weather breaks), rainfall (cloudburst in September), drops in temperature (a trigger for mushroom growth) and the appearance of other species that associate with ceps, are all signs to get your basket ready.

Fly agaric (amanita muscaria), the miller (Clitopilus prunulus) and peppery boletes (Chalciporus piperatus) are often clues to good hunting -grounds, especially under spruce trees. I find the relationship between ceps, spruce trees, the miller and the peppery bolete to be so reliable that I believe (though i’ve seen no scientific research to prove this) that the relationship is more than just shared habitat, but a complex interdependency. It has been known for some years that peppery boletes are parasitic on fly agaric mycelia, but I suspect there is more at play here. Who knows what complex battles, alliances and trades are going on beneath our feet!? 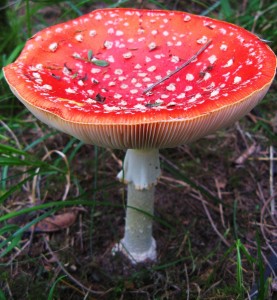 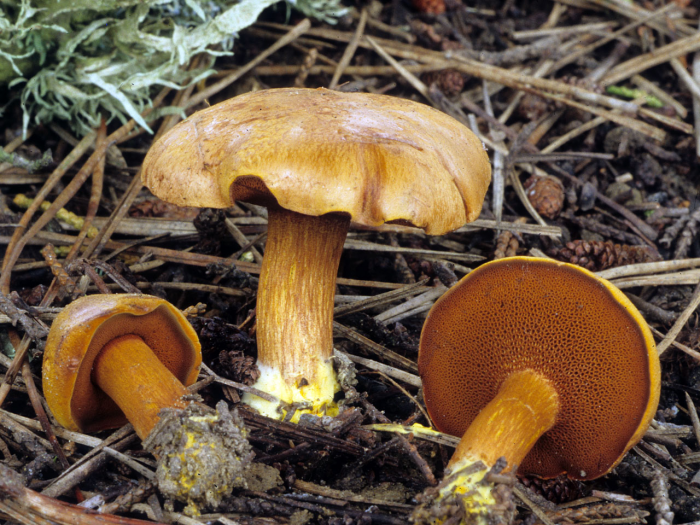 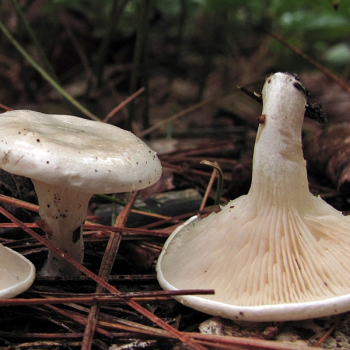 Fly agaric, peppery bolete and the miller – all good signs that there may ceps about under pine and spruce

I often curse the monoculture created by huge swathes of sitka spruce plantations, but as mushrooms don’t need light to flourish, I must confess to gathering some tremendous hauls of ceps beneath their boughs. In 1998 W Scotland enjoyed unbroken hot weather right up to September when heavy rain broke the drought, resulting in a fungi invasion. I harvested nearly 50kg of prime bouchon cep from a 500 square metre area of south-facing sitka spruce plantation – and I was only taking the best 10% of what was there. We ate a lot of risotto that winter… 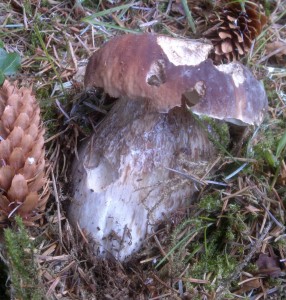 A cep emerging from the ground, already having received much attention from insects and slugs

Inexperienced foragers can have trouble distinguishing ceps from other less desirable pored mushrooms or boletes, often due to wishful thinking. This is not the worst of failings as only the red pored and rare devil’s bolete is dangerously poisonous, though several can be bitter and indigestible. It doesn’t help that ceps are very fast growing and their appearance changes rapidly during the few days it takes them to emerge, mature and begin to rot.

Which leads me to the bad news…

The one downside to gathering ceps, it is that insects value them every bit as much as we do. I try to be philosophical about this, remembering that they are food, home and nursery to a great many beasties with fine taste, and an important part of the woodland ecosystem. But when 90-95% of outwardly perfect specimens turn out to be infested (often even before they have fully emerged from the ground), it is hard not to become dispirited.

I usually expect a ratio of about 1 salvageable cep to 10 knackered ones. Fungal gnats (Sciaridae spp) in particular appreciate them even more than humans as food home & nursery for their larvae. We may curse them, but they do help to spread fungal spores, and who knows what other useful interactions they have with complex fungal lifecycles? In my experience, unless I get really lucky, less than 1 in 25 of the ceps I find contain no gnat larvae at all. This isn’t as bad as it sounds, as trimming, slicing and quickly/thoroughly drying means the larvae fall out, leaving perfectly delicious cep with the already superb flavour intensified. Anyone who feels squeamish about this should know that nearly all commercially sold dried porcini (including that which is used to flavour tinned mushroom soup!) will have been home to fungal gnat larvae at some point.

Fed up of infested, mushy ceps? Why not hunt slower growing, insect resistant mushrooms like hedgehog mushrooms, winter chanterelles or chanterelles instead? You can read more in depth about their ecology and durability here too. 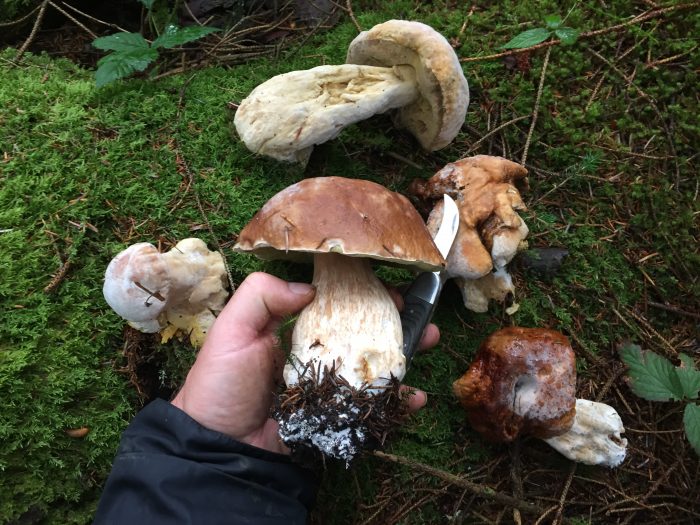 Everything loves to eat ceps, including other fungi! In action in this picture (above) is bolete-eater fungus, Hypomyces chrysospermus, which starts off as a white mould on the pore surface of boletes, then quickly spreads throughout the whole mushroom, turning chrome yellow as it matures and rendering its host a pile of smelly moosh in a matter of hours! I get sent a lot of ID requests for festering carcasses of hypomyces victims. Bleurgh.

For more advanced gourmet mycophagists only…I’ve discovered that if you can catch your ceps at the very early stages of Hypomyces chrysospermus infection – characterised by the odd rusty spot, perhaps the very beginnings of mould/mushiness and a somewhat cheesy smell – this actually adds wonderful parmesan-like umami to the mushrooms once dried. Really good, but i’m only talking about the very early stages of infection here. 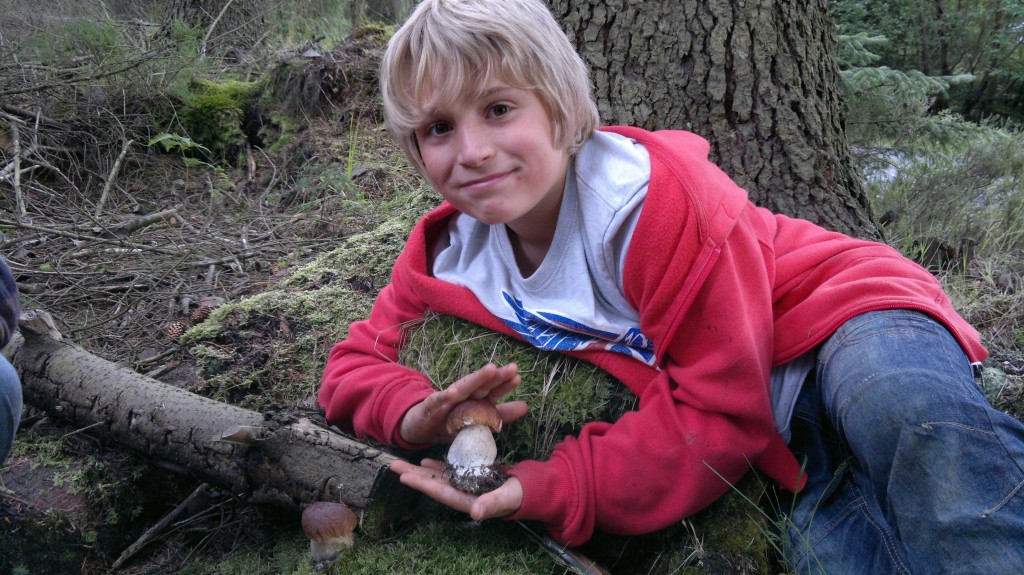 Ceps, dried or fresh, will lift any mushroom dish to a new level. Even a small amount added to other mushrooms can make quite a difference. Here are some of my favourite recipes – but be sure to try them raw in the forest first!