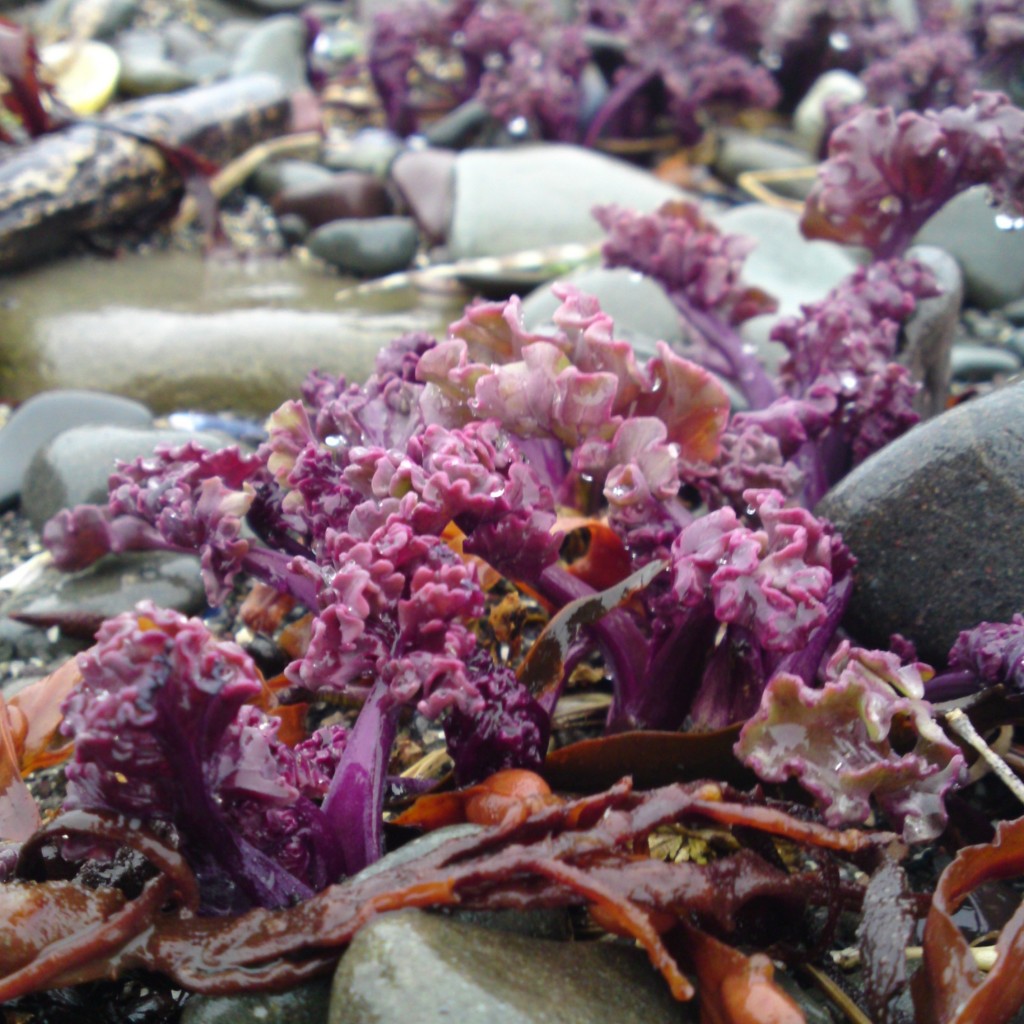 Even if it wasn’t edible sea kale would still be my favourite plant (well, maybe equal with common hogweed). Its alien-looking purple shoots, sculpturesque leaves and clouds of nodding flowers are works of high art to intoxicate the senses and marvel the mind. As luck would have it, it also happens to be absolutely delicious, providing some sort of food for most of the year. I place it on a par with ceps, reedmace, hogweed and spoot clams in the pantheon of wild food gods. 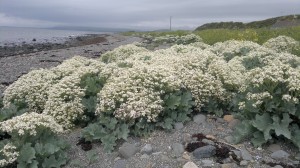 A cloud of sea kale in full flower, May

The youngs shoots are great raw in salads, or as crudités (especially dipped in wild garlic pesto, which is in season at the same time). They are also good lightly steamed, tossed into a stir-fry, or poached in seaweed ramen. 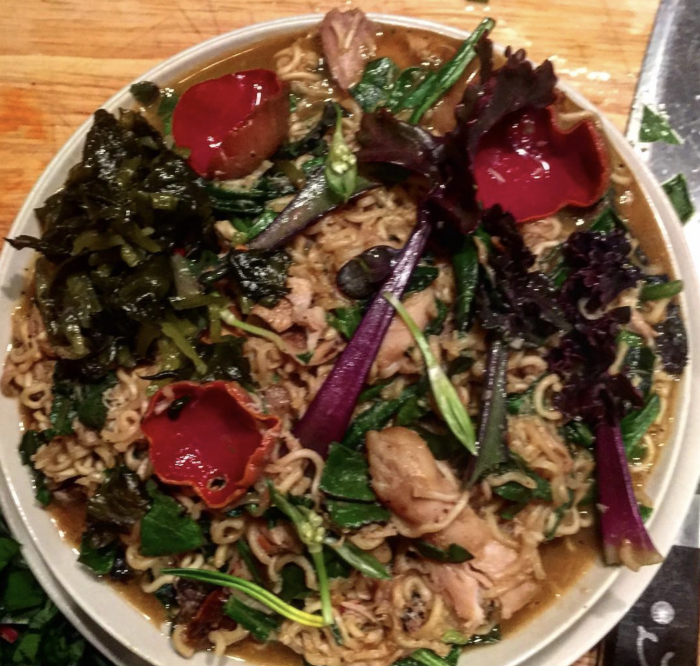 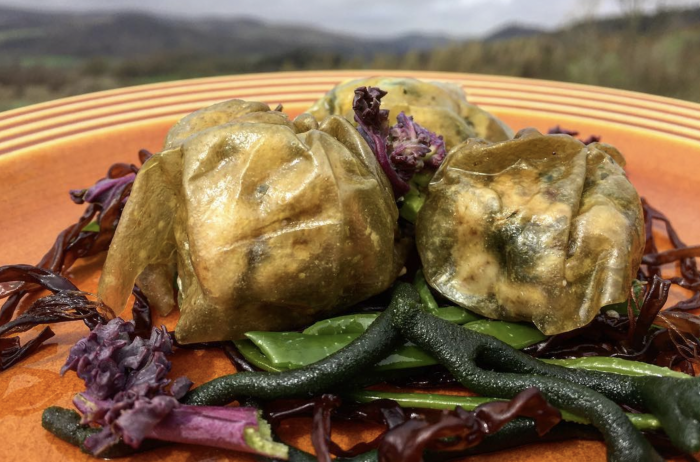 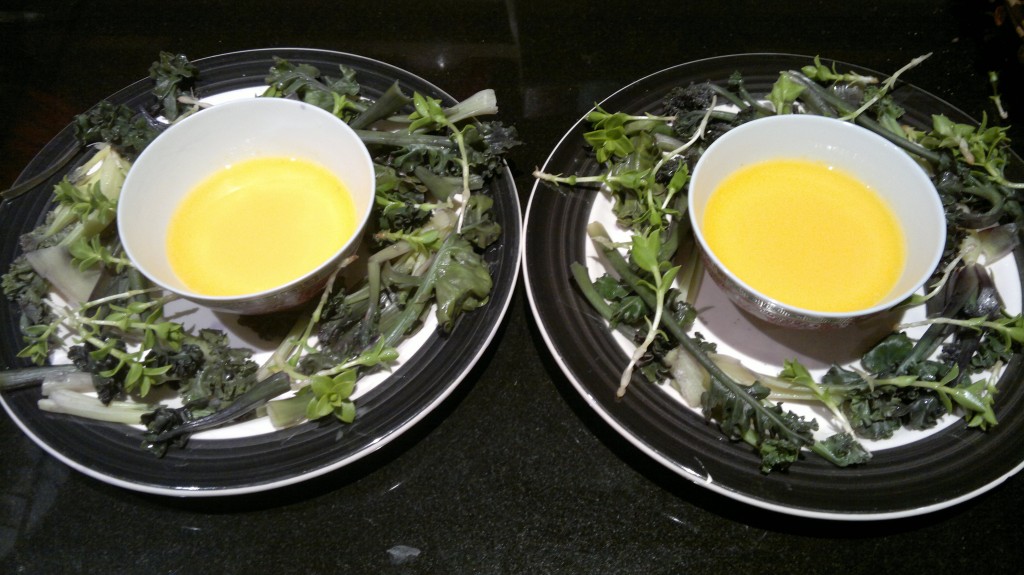 Once the florets form, treat them just as you would purple sprouting broccoli – as a vegetable for all occasions. I have tried a few methods of preserving this remarkable glut of young shoots and florets, but my efforts have been mostly unsuccessful. Being reasonably closely related to cabbages, you might expect them to ferment well, kimchi style. But all my efforts (and i’ve made a few) have tasted deeply unpleasant – bitter and sulphurous – despite the fermentation having worked successfully (ie. the plants ferments, but tastes awful!). Pickling in a cold vinegar solution (3 parts vinegar to 2 parts water to 1 part sugar, or thereabouts) works slightly better, but still bears little resemblance to the delightful fresh version.

The best way I have found of putting some by is to blanch – freeze them. That is, add small quantities of the washed shoots and florets to vigorously boiling water for 2 minutes, then cool rapidly in iced water before draining and freezing. 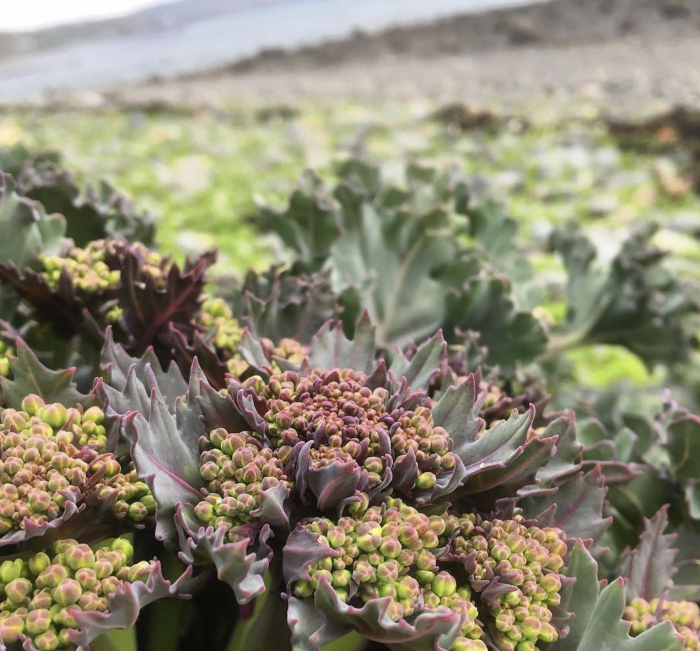 Apparently sea kale was once a common sight above the high tide mark on many of Britain’s shingle beaches, but is now restricted to sporadic colonies and clusters. This is mostly due to a Victorian penchant for digging them up and transplanting them to ornamental gardens. As always, habitat loss is also an issue: the construction of sea defences has been the death-knell of many a colony. More often than not nowadays, the tramping of young shoots by careless walkers is their biggest threat. Considerate foraging of a few parts of each plant is unlikely to have much impact on these deep-rooted perennials, and I feel that foragers can have a role to play in safeguarding and reintroducing these beautiful plants. 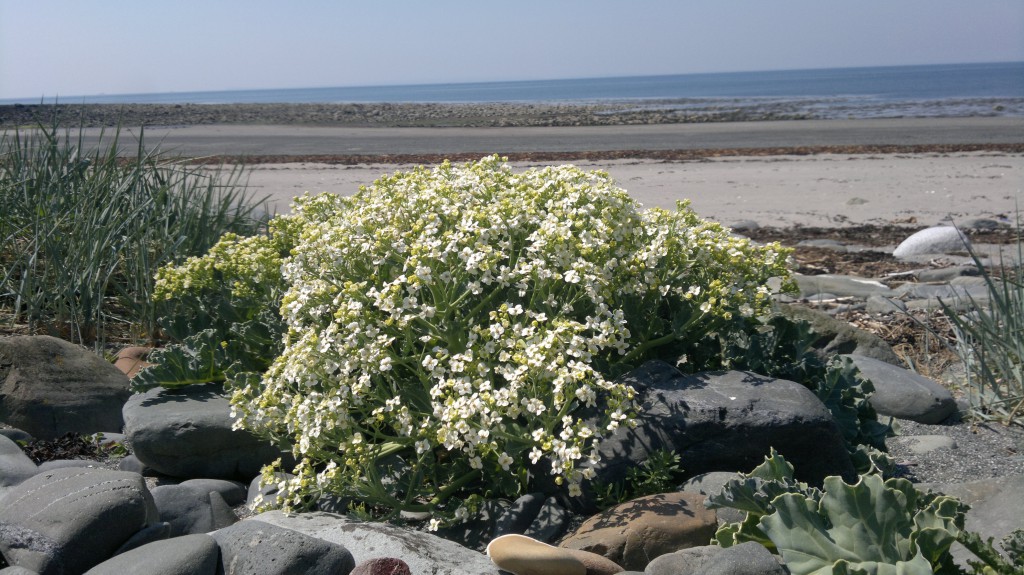 I am fortunate to live quite near a few large and well established colonies which keep me in delicious greens for most of spring and early summer.  I know several sites with only one or two plants. Whether these are the beginnings of new colonies or the last vestiges of receding ones, I leave them to their rather wonderful business.

Naturally forced sea kale shoots. Where the sea deposits pebbles, shingle, driftwood and seaweed on emerging sea kale shoots, they develop long, pale tender stems in their stretch for light. This adds extra deliciousness to an already scrumptious vegetable. Some sea kale aficionados will deliberately ‘bank up’ emerging plants to create forced shoots, but I prefer to enjoy them as a wee bonus when nature decides. 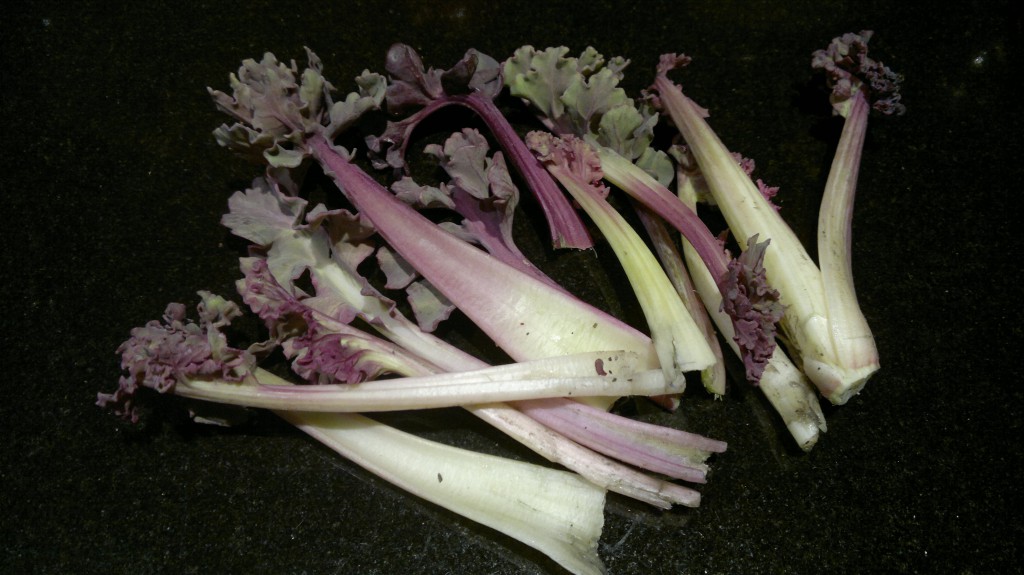 Young sea kale shoots, at their optimum size and condition for eating. Shoots like this can be gathered from among larger, less palatable leaves for most of the growing season.

I hope everyone can experience and enjoy the sensual and gastronomic delights of sea kale, without impacting on its place in the world. I suspect that foragers will cherish and enjoy this plant so much, they are much more likely to contribute to its success and distribution than undermine it.

Here is a photo-tour of a year in the life of this remarkable plant:

Sea kale is a native perennial, over wintering in a deep and extensive root system. All that is evident in winter is the top of the root and some large, dead leaves. The roots are edible, but apart from needing a JCB to get them up, it would be a crime (legally and metaphorically) to dig them up. I have read that hey don’t have much culinary merit anyway.

This rather grim picture was my first sight of sea kale, giving few clues of the beauty to come…

During February the first signs of life start to appear, with deep purple shoots emerging from the woody root-tops. 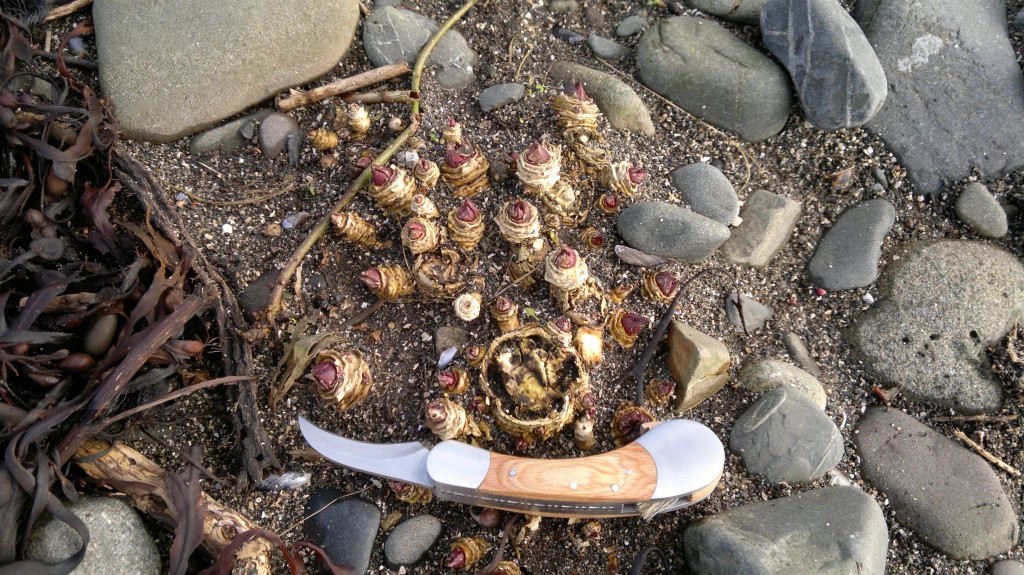 By mid March, striking deep purple coral-like shoots will develop. At this stage the leaves are succulent, crisp and tender, with a sharp cabbagy pepperiness and make an amazing centrepiece to any salad. If you are tempted to try a couple at this stage, resist and completely bury the shoots in shingle. If you return in a few weeks time, the shoots will have forced their way up and yield lovely long stems that can be cooked like asparagus. 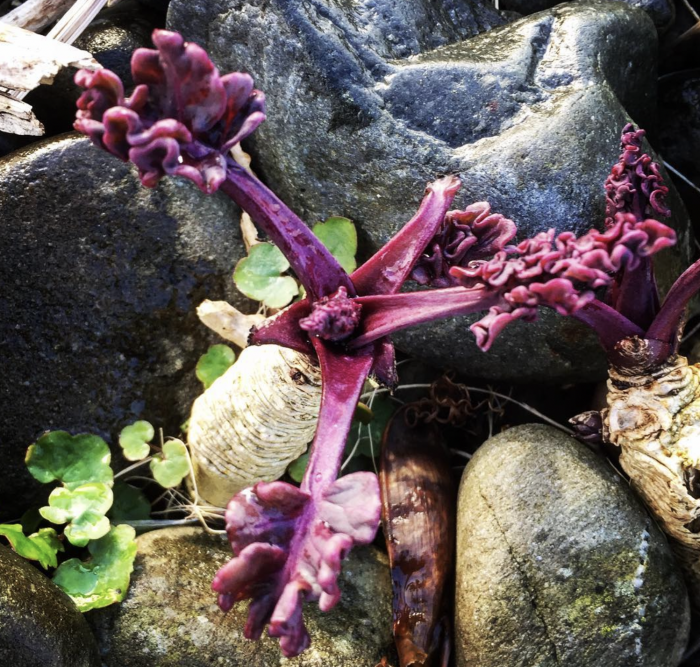 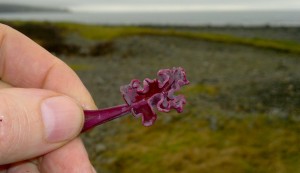 By mid April the earlier weirdness will be starting to resemble something rather more cabbagy, with the leaves thickening and taking on more green hues. Leaf colour can be quite variable between two neighbouring plants – most commonly they are greenyblue, to rich greens and purples. 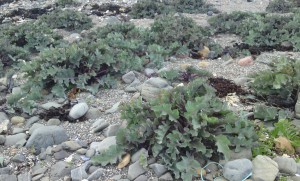 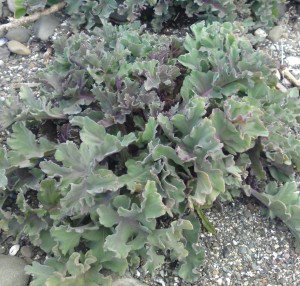 Flower heads start to form in mid April  to May. They are a delight, and can be used just like purple sprouting broccoli.

By mid-May, most of the flower heads should have opened out into  fabulous crowns of small white flowers and if you are among a large colony, you will be intoxicated by the honied scent of the blossoms. They taste as good as they smell and make a striking and delicious accompaniment to meat and fish. The stems taste mildly of pea and cabbage which combines remarkably well with the sweetness of the blossom. I have seen seasoned michelin starred chefs get as giddy as a child in a sweetie shop when introduced to this for the first time! The leaves by now will be getting large and thick, but you should still be able to find young, tender ones if you delve through the foliage.

Sea kale flower above a carpet of ivy-leaved toadflax

By summer, some of the leaves may be a much as 2 feet long by which time they will have become tough, bitter and in need of a lot of cooking if you plan to eat them. I have had success cutting them into long ribbons and cooking like tagliatelle. A word of warning here though: my wife and I once ate a delicious fully-foraged meal of Wigtown Bay sea bass stuffed with sorrel and sweet ciceley served on a bed of mature sea kale leaf tagliatelle. It left both of us at a rapid rate of knots in liquid form exactly 30 minutes later and sea kale was the most likely culprit! I should add that there were absolutely no other ill effects, it simply left us feeling light and purged. I’m sure there are Hollywood starlets that would pay a lot for such an ingredient! 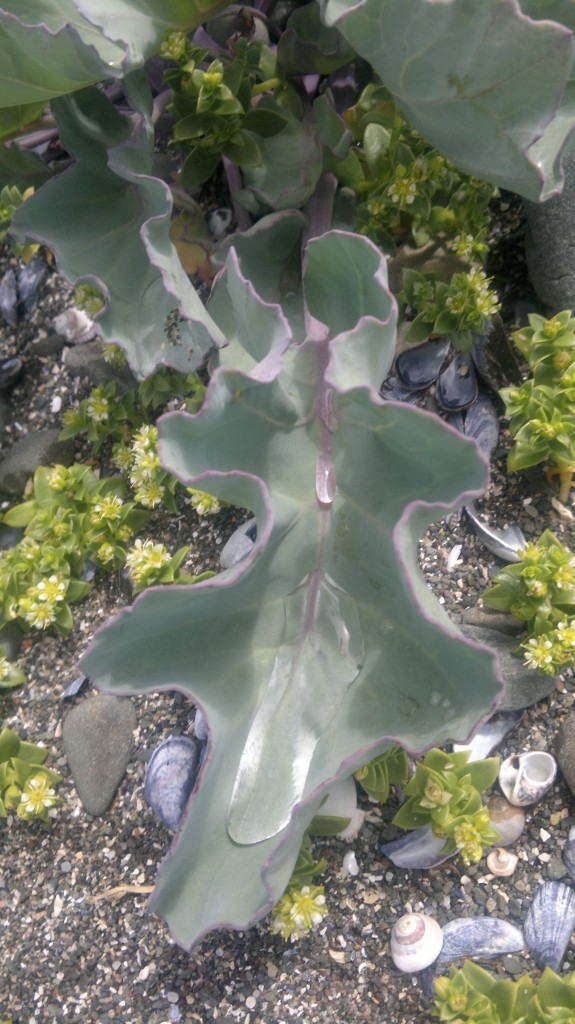 As summer gets going, strange round translucent green fruits appear. They look like peas and taste like cabbage and are the final wonderful twist in the life-cycle of this remarkable plant before it dies back to escape the winter storms. 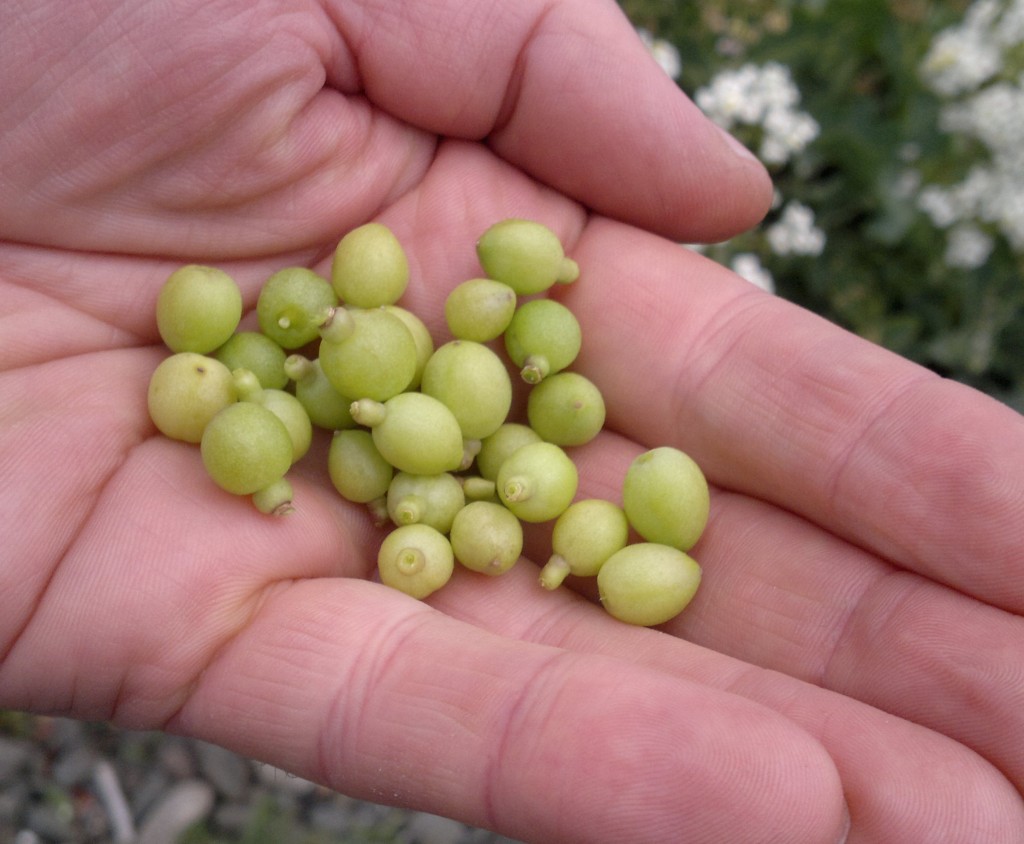