A guest post by Shelia Dillon, food journalist and presenter of the BBC Radio 4 Food Programme.

You can listen to the recording from our day out exploring wild UK spices here. 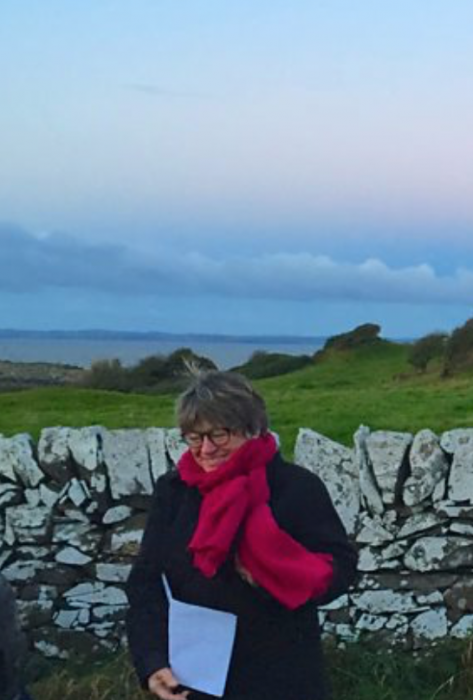 Sheila already having fun 6am on a cold November morning!

“I was standing in a wide fast-flowing stream, the cold water pressing my wellies against my legs, watching Mark Williams reach out for some dead, unappetising looking brown seed heads. The sun was shining in one part of the sky and it was starting to rain. And I though, this is happiness and…. this is strange…

Mark is a foraging teacher in Scotland’s south-west. He teaches foraging to chefs, children and interested amateurs all over Britain and consults on flavourings for lots of the new distillers producing spirits that are drawing in a new generation of appreciative drinkers. But right up to the day I went wading and squelching through tide pools on the beach at Carrick shore, near Gatehouse of Fleet, the idea of meeting a forager hadn’t thrilled me. It seemed to me that ‘Forager’ equalled ‘hipster’ —embodying the kind of self-conscious, o wow kind of food thing that sets my teeth on edge. But my producer Rich Ward wanted to make a Food Programme about Mark and talked him up to me as no hipster, but someone who’s really making a difference to lots of lives. Someone we’d learn from. And he was right.

Those unpromising brown seeds were angelica. They tasted like citrus peel with a nutty edge. Just one of the ingredients we were gathering as part of the challenge Mark had set himself on our behalf. He said we’d got lazy in Britain, relying on imports to spice up our food when growing all around us is our very own spice rack. A host of flavours which a lot of people used to know how to find and use in the centuries before we had an Empire which sent us so many of its food riches so cheaply. He said he could find in the wild (with a few extras from his own garden—like magnolia petals for that touch of ginger) all the ingredients to produce authentic mushroom pakoras. It seemed unlikely to me….

But, at dawn, the tide at its lowest, we set about clipping pepper dulse—a seaweed— from the rocks. For the pepper hit, obviously (and it really was peppery). Then scurvy grass on the shoreline for a mustard seed twist. Gorse flowers for a touch of coconut, wood avens roots for the clove flavour. Fermented and dried wild garlic leaves. Waterpepper for the chilli edge. We were too late in the year for sea arrow grass which would have given us a coriander taste. But by the time we got into Mark’s kitchen he’d brought to- gether almost twenty ingredients, including hedgehog mushrooms. So he set about chopping, grinding and mixing….finishing them off by incorporating most of them into a chickpea batter (not wild….). and fried them in some local rapeseed oil. Water pepper and gorse flowers were sprinkled on to serve.

Pakoras, to my amazement, as good as they get. 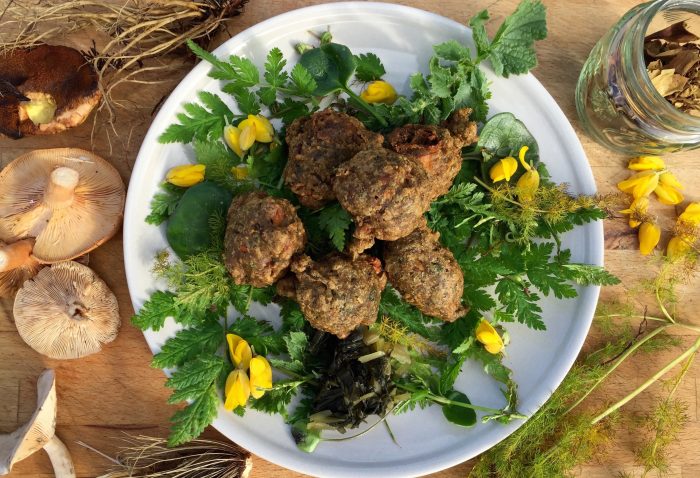 The most tasty, pleasure-giving reminder of what food is.

It’s us, it’s nature, it’s around us. Not something we need always to distance ourselves from with plastic wrappers, styrofoam trays and portions of exotic this and that in the chill cabinet. As Mark said when we were picking gorse flowers on the hill, “ I always think that when coconuts first arrived in this country, people must have said, Wow, they taste just like gorse!” The probably didn’t actually say Wow….but it’s a marvellous reminder of what we’ve almost lost.” 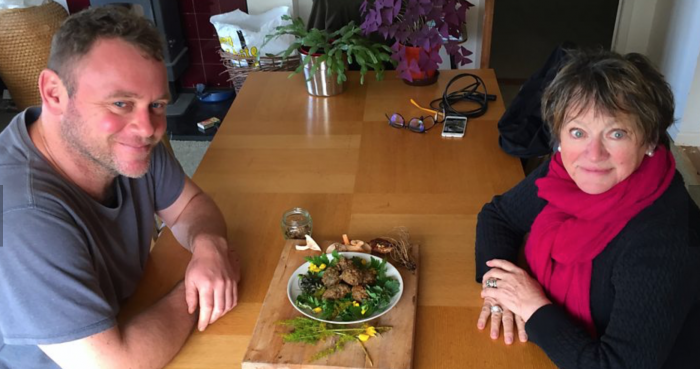 Mark and Sheila, about to tuck into wild spiced pakora.